On Nov. 7, using a 10-inch-diameter telescope, astronomers recorded a tiny blip northwest of Mare Imbrium, the moon's "Sea of Showers." Such impacts are not uncommon, but it was only in 1999 that scientists first recorded a lunar strike as it happened. 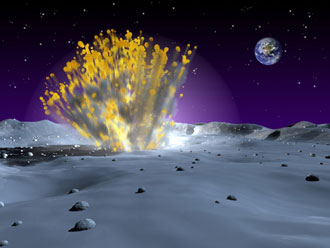 "People just do not look at the moon anymore," said Dr. Robert Suggs, Space Environment team lead in the Natural Environments Branch of the Marshall Center's Engineering Directorate. "We tend to think of it as a known quantity. But there is knowledge still to be gained here."

As NASA plans to return to the moon, the agency has a need to understand what happens after lunar impacts in order to protect lunar explorers. On Earth, the atmosphere vaporizes most small meteoroids, leaving nothing behind but a brief streak of light. The vacuum environment on the moon, however, means there is nothing to slow incoming meteoroids before they strike.

"The likelihood of being struck by a meteoroid on the lunar surface is very, very small," said Bill Cooke, an astronomer in Marshall's Meteoroid Environment Office. "The challenge is learning what happens to high-velocity ejecta, the debris kicked up by a meteoroid strike, which is not hindered by atmospheric friction or Earth gravity. What threat does that debris pose to humans or equipment?" + Bill Cooke discusses the lunar meteor strike (MP3 audio)

Suggs, who heads the impact study, used commercial software tools to study the video frame by frame, and spotted a very bright flash. The burst of light diminished gradually over the course of five video frames, each 1/30th of a second in duration. Suggs called in Cooke, and both scientists agreed that the bright light was an impact flash, captured by video from some 248,000 miles away.

Immediately, the team began ruling out other possible causes. Two telling characteristics won out -- the gradual diminishment of the flash rather than an on-off "winking" effect, and its motionlessness. A flicker of light from a moving satellite, Cooke noted, would have appeared to shift perceptibly, even in five brief frames of video. 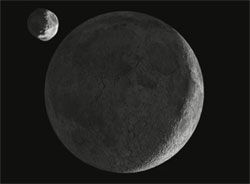 Suggs and Cooke next consulted star charts and lunar imaging software and determined the meteoroid was likely a Taurid, part of an annual meteor shower active at the time of the strike. Based on the amount of light produced the object was roughly five inches in diameter, traveling more than 60,000 mph, and may have gouged a crater nearly 10 feet in diameter out of the moon's surface.

The Taurids, which approach Earth from the direction of the Taurus constellation, are believed to be ancient remnants of comet Encke, which orbits the Sun every 3.3 years.

NASA scientists previously studied lunar meteor strikes during the Apollo moon program, but lacked the sophisticated video cameras and high-powered image processors to capture the tiny, telling flashes. Now, however, as NASA readies its next-generation spaceship to carry explorers back to the moon for potential long-term stays, Suggs and Cooke say lunar impact research is more vital than ever.

"Large-scale lunar facilities are sure to be well-protected, using impact-resistant technologies much like those developed to shield the space shuttle and the International Space Station," Suggs said. "We want to support additional measures that safeguard personnel working in the lunar field – early-alert systems, emergency protective measures and new technologies that will mitigate risks from flying impact debris."