Grow Text SizeShrink Text Size
Astronaut Safety Gets Max Attention
NASA's next generation of spacecraft will have the safest-ever astronaut escape system, a modern-day version of the reliable Apollo system. Like Apollo, the Orion launch abort system will swiftly propel the crew capsule away from the nose of the Ares I rocket and out of harm's way in case of an emergency on the launch pad or during ascent to orbit.


Also -- as was the practice at times during development of key Apollo elements -- while NASA engineers are working on the Orion launch abort system, another NASA team is investigating an alternate launch abort concept.

MLAS was named after Maxime (Max) Faget, a Mercury-era pioneer. Faget was the designer of the Project Mercury capsule and holder of the patent for the "Aerial Capsule Emergency Separation Device," which is commonly known as the escape tower. 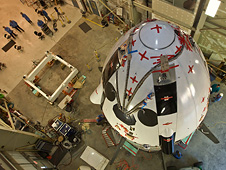 The unpiloted test was part of an assessment by the NASA Engineering and Safety Center (NESC) of a potential alternate launch abort system concept which could be used for future piloted spacecraft. The prototype, used in the test to evaluate means to safely propel a spacecraft and its crew from an errant rocket, represents a departure from the tower launch abort system used during Apollo launches and retained for the Constellation Program. A primary objective of the MLAS test is to provide the NASA workforce with additional direct implementation experience in flight testing a spacecraft concept useful in the Agency's future efforts to design, optimize and test spacecraft.

The bullet-shaped MLAS concept will not replace the Orion abort system.

NASA's Constellation Program has three years toward designing the Orion crew exploration vehicle and the Ares launch vehicles that will return humans to the moon to live and work. The spacecraft designs are based on the technical principles established during the Apollo and Space Shuttle programs - yet incorporates the latest technology to expand the spacecraft's operational flexibility. The Orion launch abort system offers a proven method of pulling the crew out of danger in the event of an emergency on the launch pad or during the climb to Earth orbit.

MLAS is of potential interest because it is theorized to have aerodynamic performance benefits, weight savings and be relatively simple in some spacecraft applications. Much of the potential gains would be accomplished by eliminating the launch abort tower, which also means eliminating the attitude control motors. 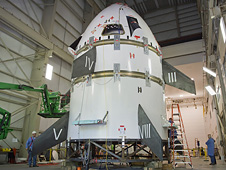 Data from the MLAS pad abort test has the potential to help the Orion Project in several ways. MLAS is the first demonstration of a passively-stabilized launch abort system on a vehicle in this size and weight class. It is the first attempt to acquire full-scale aero-acoustic data -- the measurement of potentially harmful noise levels due to the capsule moving through the air at high speeds -- from a faired capsule in flight. It also is the first to demonstrate full scale fairing and crew module separation and collect associated aerodynamic and orientation data. In addition, data from the parachute element will help validate simulation tools and techniques for Orion's parachute system development.

The NESC, located at NASA's Langley Research Center, Hampton, Va., is an independently funded NASA program that draws on technical experts from across all NASA centers to provide objective engineering and safety assessments of critical, high risk projects.

Each of the NASA Centers participated in the Agency-wide MLAS effort by providing engineers and technicians, analysts, designers, mission assurance specialists and/or use of their test facilities.

For images and video of the test firing, visit: