Grow Text SizeShrink Text Size
Sensors to Guide Spacecraft to Safe, Distant Landings
NASA is developing technologies that will allow landing vehicles to automatically identify and navigate to the location of a safe landing site while detecting landing hazards during the final descent to the surface. This is important because future missions -- whether to the Moon, an asteroid, Mars or other location -- will need this capability to land safely near specific resources that are located in potentially hazardous terrain.

One is a three-dimensional active imaging device, referred to as flash lidar, for detecting hazardous terrain features and identifying safe landing sites. The second is a Doppler lidar instrument for measuring the vehicle velocity and altitude to help land precisely at the chosen site. The third is a high-altitude laser altimeter providing data prior to final approach for correcting the flight trajectory towards the designated landing area. 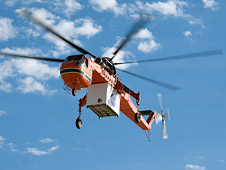 The integrated lidar sensor suite was carried in a protective shell by a leased firefighting helicopter to the observation area. The observation door, at bottom, is closed in this photo. Credit: NASA/Tony Landis 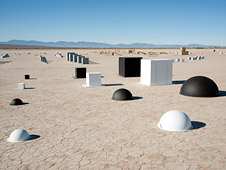 The sensor suite was flown over varied objects on Rogers Dry Lake to test the system's ability to detect potentially hazardous objects on the surface. Credit: NASA/Tony Landis 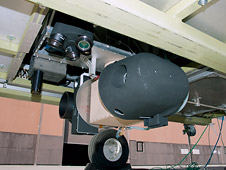 Three sensor systems were integrated for the flight tests in July. The sensors are being developed to help assure safe landings of future manned and robotic spacecraft on extraterrestrial bodies. Credit: NASA/Tony Landis

In conjunction with laser/lidar sensor development at Langley, NASA's Jet Propulsion Laboratory, Pasadena, Calif., is developing algorithms, or mathematical procedures, for analyzing the acquired three-dimensional lidar maps and determining the most suitable landing site. The resulting Doppler lidar and laser altimeter data are used by the navigation system being developed by NASA Johnson Space Center, Houston, and Charles Draper Laboratory, Cambridge, Mass., to control the spacecraft to the identified location.

These technologies have been integrated as part of NASA's Autonomous Landing and Hazard Avoidance Technology (ALHAT) project and are in the process of being demonstrated in a series of flight tests.

"These were the first tests where we had all three of our laser systems on board and working together as a complete sensor suite," said Langley's Farzin Amzajerdian, technical lead for development of the sensors. "These tests are being viewed as critical by many within NASA."

Robert Reisse, Langley project manager, added, "We were pleased that the flight tests we've conducted so far have resulted in better than expected performance of these sensors."

The main objective of the first test, carried out in May 2008, was to demonstrate the application of 3-D imaging technology, or 'flash' lidar, for topography mapping and hazard detection.

The second round of flight tests, completed in August 2008, was to evaluate the capabilities of the Doppler lidar. This lidar provides high reliability vehicle velocity vector, altitude and attitude with about two orders of magnitude higher precision than radars.

The third flight test campaign was conducted in June 2009 in which the flash lidar and laser altimeter were integrated and flown onboard a fixed-wing aircraft to assess its performance for terrain relative navigation and altimetry functions. Several flights were performed in areas of Death Valley and in the Nevada Test Site with various flight profiles and altitudes reaching more than five miles above ground level. Locations were selected primarily because of topographical similarities to the lunar terrain.

For the most recent field test, a Sikorsky S-64 helicopter carried all three lidar systems in a pod along with their support instruments. The flash lidar was mounted on a gimbal controlled by the ALHAT processor box that included a navigation filter built specifically for ALHAT by Draper Labs and a human interface module built by NASA Johnson. The processor box also included a 3-D elevation map generator developed by NASA JPL.