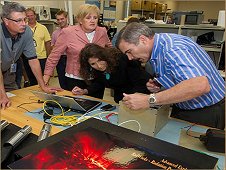 Mark Christl, lead on the ANS Project at Marshall (far right), demonstrates the ANS to representatives from Johnson and Marshall. Left to right: Nasser Barghouty (MSFC), Edward Semones (JSC), Chris Cianciola (MSFC), Catherine Mcleod (JSC), Bobbie Swan (JSC), and Mark Christl (MSFC). (Image credit: NASA/MSFC)
View large image The complexities of traveling to and working in space present challenges to astronauts that NASA scientists and engineers have been working on since Neil Armstrong and Buzz Aldrin first stepped on the moon more than 43 years ago.

One of the challenges facing humans when they go outside Earth's protective atmosphere and magnetic field is space radiation. Sending astronauts farther into our solar system than ever before will require advanced instruments designed for monitoring and detecting radiation in space vehicles and habitats.

NASA is tackling this problem with a renewed focus on understanding radiation in space environments. The Advanced Neutron Spectrometer, or ANS is an instrument designed to do just this. By monitoring neutrons, the team aims to build a new tool to protect astronauts as they explore new destinations.

"Measuring neutrons in a space environment will keep astronauts safer because it will give mission managers on Earth invaluable information about the amount of radiation astronauts are being exposed to," said Mark Christl, the ANS project lead at Marshall. "The ANS can be used to detect the levels of radiation in the spacecraft or habitat so that astronauts can employ techniques to minimize their exposure."

Neutrons are difficult to detect because they are electrically neutral particles and pass through most detector systems without detection. The ANS uses a new instrument design that can significantly improve the reliability of identifying neutrons in the mixed radiation field found in deep space. This instrument design uses the gate and capture technique that slows down the neutrons and then "captures" them in an isotope of Lithium. The ANS uses special glass fibers loaded with Lithium to absorb the slowed neutrons and produce a small flash of light unique to the neutron capture process. The ANS uses custom electronics to recognize and trigger on the distinct neutron capture signal, which is then processed and analyzed to determine the radiation levels.

Scientists and engineers at Marshall Space Flight Center have been developing a prototype for the ANS instrument in close collaboration with JSC and other NASA centers and recently shared their work with the RadWorks team from Johnson and Langley Research Center. Christl and his team at Marshall developed the prototype instrument in only 11 months. They used radioactive sources and exposures to high energy protons at Indiana University Cyclotron Facility to evaluate the performance of the ANS.

"Our work thus far has been very promising," said Christl. "By working closely with JSC and other NASA centers, we've been able to make great strides on some key radiation protection issues that include the ANS prototype. Our goal is to continue this work to improve the instrument performance and our radiation monitoring capabilities for our astronauts and meet the future needs of exploring new destinations."

The ANS is being developed by RadWorks, an Advanced Exploration Systems (AES) project to address radiation detection, monitoring, and protection that will be needed for manned exploration beyond low-Earth orbit. RadWorks is a cross-agency team, led by Johnson Space Center, addressing several specific radiation related issues, including the development of ANS.

For more information on the ANS project and RadWorks, contact Mark Christl at mark.christl@nasa.gov.