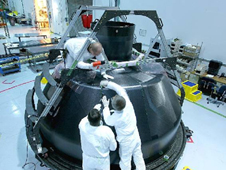 Technicians at the ATK facility in Iuka, Miss., prepare the Composite Crew Module for autoclave curing.


One NASA team believes future space capsules may be made with advanced composite materials, the stuff race cars, sailboats, and high-end sports equipment are made of today. Composites look attractive because they are tough and lightweight, and can be formed into complex shapes that may be more structurally efficient.

That’s why the NASA Engineering and Safety Center (NESC) established a team of structures experts to gain experience in using composites and suggest an alternative approach for future spacecraft designers.

NESC’s nationwide government-industry team tackled a challenging assignment: Build the internal, primary structure for a space capsule like the Orion crew module that NASA is developing for a 2020 return to the moon, but make it out of composites.

NASA has never certified a habitable spacecraft that uses a composite primary structure. The crew module, which contains the astronauts during launch and re-entry, must be as robust as possible.

The material itself is familiar, but how to take that material and build a complex, compact space structure that is reliable, cost-effective and safe for human space travel is proving to be a good learning experience. For example, the team is learning how to integrate design features from geographically separated designers. 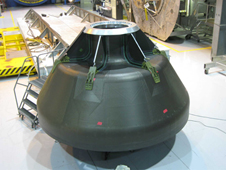 After individual Composite Crew Module parts were fabricated and oven-cured, they were assembled for a “dry fit check” prior to final assembly and shipment to NASA's Langley Research Center in Hampton, Va., for testing and analysis.


A module built of composite material could weigh as much as 10 to 15 percent less than an aluminum counterpart through the use of complex shapes. In space travel, where every additional pound of weight drives costs higher, a weight savings of 10 percent could provide increased payload capacity and reduced mission expense. A composite capsule may also be less costly and quicker to fabricate than a metallic capsule.

Kirsch believes work on this project will enable more informed decisions about structural materials for future NASA spacecraft, helping researchers determine the best balance of features from among competing alternatives. “The intent of the project is to give our NASA engineers the hands on experience with designing, building, and testing composites.” Kirsch also believes that composite spacecraft will play a major part in NASA’s return to the moon and in missions beyond.

If the results of the composite crew module project are positive, don’t be surprised to see composite spacecraft in NASA’s future. Composites are already being considered for lunar landers, habitation modules and launch vehicle structures where weight is a premium. 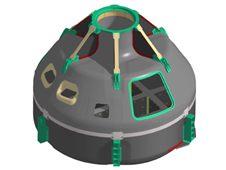 
Meanwhile, the project may have an even more immediate payoff since developers of NASA’s Orion crew module are considering a unique design feature of the composite crew module for their own use. In considering how best to design a composite crew module, the team made the floor, its structural underpinning and the walls of the pressure shell one single, combined structure that, as it turns out, offers a way to share the loads between the inner and outer shells in the case of a water landing. This concept is valid for both composite and metallic crew modules.

The composite crew module project was initiated in January 2007. Testing of the final assembly is projected to begin in January 2009. The composite crew module primary structure is constructed of a stiffened honeycomb sandwich of carbon fiber and is composed of an upper and lower pressure shell spliced together. The splicing is accomplished without the use of an autoclave, a large, pressurized oven used to cure composite materials. Module components were fabricated and assembled at the Alliant Techsystems, or ATK, facility in Iuka, Miss. These components were then shipped to Langley for testing.

NASA engineers will put the composite crew module through a rigorous testing program. Testing will be accomplished on a hydraulic rig that will apply force to all critical parts of the capsule, simulating the stresses the capsule would encounter during a space flight.

By Matt Coffey and Keith Henry