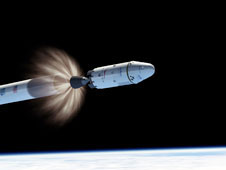 Image above: This artist concept shows the second stage engine of a SpaceX Falcon 9 rocket igniting to send the company's Dragon capsule into orbit as the first stage falls away.
Image credit: SpaceX
› Larger image 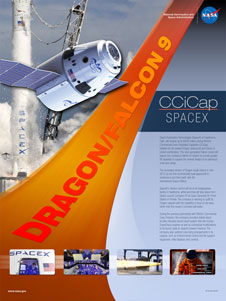 During the company's first milestone, a technical baseline review, NASA and SpaceX reviewed the Dragon spacecraft and Falcon 9 rocket for crew transportation to low-Earth orbit and discussed future plans for ground operations for crewed flights. The second milestone included a review of the company's plan to achieve the CCiCap milestones established during SpaceX's $440 million Space Act Agreement. SpaceX also presented the company's financial resources to support its co-investment in CCiCap.

At the company's headquarters in Hawthorne, Calif., on Oct. 29, SpaceX presented techniques it will use to design, build and test its integrated system during the third milestone, called an integrated systems requirements review. The company also provided NASA with the initial plans it would use for managing ground operations, launch, ascent, in-orbit operations, re-entry and landing should they begin transporting crews.

"These initial milestones are just the beginning of a very exciting endeavor with SpaceX." said Ed Mango, NASA's Commercial Crew Program manager. "We expect to see significant progress from our three CCiCap partners in a fairly short amount of time."

SpaceX also has completed its Space Act Agreement with NASA for the Commercial Crew Development Round 2 (CCDev2) initiative, the development phase that preceded CCiCap. During CCDev2, the company designed, developed and tested components of a launch abort system. A large hypergolic engine named SuperDraco would propel the Dragon spacecraft away from its rocket to save the crew from a disastrous event during launch or ascent. SpaceX also built a rocket engine test stand for developing an abort system. Engineers from NASA and SpaceX analyzed the trajectories, loads and dynamics the spacecraft would experience as it separates from a failing rocket.

"Our NASA team brought years of experience to the table and shared with SpaceX what components, systems, techniques and processes have worked for the agency's human space transportation systems in the past and why they've worked," said Jon Cowart, NASA's SpaceX partner manager during CCDev2. "This sharing of experience benefitted both NASA and the company, and is creating a more dependable system at an accelerated pace."

SpaceX is one of three U.S. companies NASA is working with during CCiCap to set the stage for a crewed orbital demonstration mission around the middle of the decade. SpaceX already is executing a contract with NASA for 12 cargo resupply missions to the International Space Station.

"The Dragon spacecraft has successfully delivered cargo to the space station twice this year, and SpaceX is well under way toward upgrading Dragon to transport astronauts as well," said SpaceX President Gwynne Shotwell.

Future development and certification initiatives eventually will lead to the availability of human spaceflight services for NASA to send its astronauts to the International Space Station, where critical research is taking place daily.