› Larger image
Ed Mango, Manager
NASA's Commercial Crew Program
"For the next two years our three partners, Boeing, SpaceX and Sierra Nevada Corp., are going to be designing and testing their integrated systems. By 2016 or so we're going to be starting to fly test missions to orbit, checking out these systems and making sure these vehicles are going to work as planned. And by 2017, we'll have at least one company that will be ready to go take crew to the International Space Station."

› Larger image
Mark Sirangelo, Head
Sierra Nevada Corp.'s Space Systems
"We believe that the shuttle has finished its mission and finished it proudly. Like the shuttle, our Dream Chaser is a piloted runway lander and in many ways is its natural continuation. Through our ongoing partnership with NASA we hope to see the amazing spirit and energy of the shuttle program now moving over to help our spacecraft become one of the vehicles to bring the U.S. back to human orbital flight."

› Larger image
Peter McGrath, Director of Business Development
The Boeing Co.
"Our basis is on Gemini, Mercury, Apollo, all the way through shuttle, Skylab, space station. We've basically worked on every human spaceflight system with NASA. So, with that we draw a lot of heritage and knowledge of what it takes to really certify and build systems for humans."

› Larger image
Tim Hughes, Senior Vice President
SpaceX
"SpaceX will be working closely with NASA to ensure that what we're doing will satisfy all NASA safety requirements. We recognize the criticality of being 100 percent right, 100 percent of the time as we move to manned spaceflight."

The spirit to live and work in low-Earth orbit and explore well beyond where we've ventured before is alive as NASA forges ahead with three major human spaceflight endeavors that will continue to build off the successes of their predecessors.

Space agency leaders talked about NASA's vibrant future in the days leading up to the handover of space shuttle Atlantis from the place it called home for more than 30 years to its new exhibition facility next door at the Kennedy Space Center Visitor Complex.

"We have not been standing still for the last year," said Bob Cabana, director of Kennedy Space Center. "We've gotten commercial cargo to the International Space Station and we have focused on what it takes to explore beyond our home planet once again." 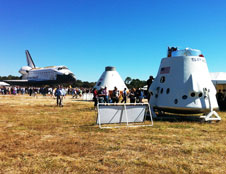 › Larger image
Image above: As space shuttle Atlantis rolled from NASA's Kennedy Space Center to the Kennedy Space Center Visitor Complex in Florida it stopped at Exploration Park where the agency's Orion and SpaceX's Dragon capsule mock-ups were stationed.
Image Credit: NASA
The move of Atlantis came a little more than one year after its final launch to the space station. Now, like its fellow space-flown orbiters, Endeavour on the West Coast and Discovery in the Northeast, Atlantis is destined to motivate and inspire a new generation here in the South.

Some of that progress is coming from the commercial rocket and spacecraft providers who are working through partnership phases with NASA to pick up where the shuttles left off, with plans to launch American astronauts to the station from U.S. soil in mid-2017.

"We really have two goals," said Ed Mango, manager of NASA's Commercial Crew Program. "One is a public purpose in which we're trying to help industry create a capability so that they can go anywhere in low-Earth orbit with a United States-led capability. The second is a NASA purpose in which we safely fly our scientists, astronauts and engineers to and from the space station as often as possible."

Through the program's newest phase, called the Commercial Crew Integrated Capability initiative, three American companies are working to bring their integrated transportation systems one step closer to manufacturing and flying.

"Competition is helping to keep all of our partners wanting to meet our requirements, wanting to transport NASA crew and wanting to do it for the least amount of cost," Mango said. "All of the analysis that we've done indicates that having one contractor would cost about twice the price."

NASA's Space Launch System (SLS) and Orion spacecraft also are on track for a test flight in 2017. The heavy-lift rocket and spacecraft will take the agency's astronauts deeper into space than ever before. Hill said SLS is designed to be an evolvable system, going from a 70-metric-ton to a 130-metric-ton lift capability.

"What we're finding is there are only a handful of missions that we can conceive that we'll need the 130-metric-ton and that's primarily going to Mars, which is our ultimate destination," Hill said.

NASA still is working out the details of when and where Orion and its crew will travel first, Hill said, but Mars is a logical destination for the future, especially with the ongoing success of the Curiosity rover currently exploring the Red Planet.

"Until a human has set foot somewhere, you really haven't been there," Cabana said. "You know, that's exploration, that's in our DNA, our drive to explore and to go beyond what we know."

To support the myriad of anticipated customers and missions, NASA's Ground Systems Development and Operations Program is busy upgrading and modifying Kennedy's existing infrastructure, including the Vehicle Assembly Building, Launch Pad 39B, the mobile launcher and crawler-transporters.

"We're preparing Kennedy facilities to truly be that multiuser spaceport of the future," Cabana said. "We have the real estate, the facilities and the technical expertise. What was once science fiction, we're now making a reality for both commercial crew and cargo and government crew and cargo to low-Earth orbit and beyond."