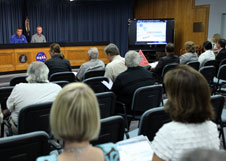 "We're spurring an industry capability to and from low Earth orbit and working to ensure the U.S. ends its reliance on foreign crew transportation to the space station," said Ed Mango, program manager of NASA's Commercial Crew Program (CCP). "We've decided now would be the best time to begin certification efforts to reduce the risk of technically challenging or costly redesigns to systems in the future."

Through CCP, NASA is facilitating the development of a U.S. commercial crew space transportation capability with the goal of achieving safe, reliable and cost-effective access to and from the space station and low Earth orbit. After the capability is matured and expected to be available to the government and other customers, NASA could contract to purchase commercial services to meet its station crew transportation needs.

NASA will take a two-phase approach to see that commercial missions are held to the same safety standards as government human space transportation system missions.

During the first phase of certification efforts, NASA plans to award Certification Products Contracts (CPC) to between two and four contractors for up to $10 million each. CPC Phase 1 will last about 15 months. In this time, the companies will develop products that will help ensure required standards and safety processes are met before a transportation system could be approved to fly NASA astronauts to the space station. The contracts are expected to be awarded in February 2013.

"In order to eventually certify these systems for space station missions, NASA needs to make sure their designs are meeting the intent of our safety and mission requirements," said Brent Jett, CCP's deputy program manager.

At the conclusion of CPC, the agency anticipates more than one company will be ready to compete for the second certification phase, called a CTS Certification Contract. The second phase will build on the first phase, and will be open to companies with systems at the design maturity level of Phase 1. The second phase will include development, testing, evaluation, and certification activities enabling NASA to assess the CTS capability for performing space station missions in compliance with NASA requirements.

"Competition has been a key aspect to the success of this program," Mango said. "We still believe that having more than one company, through as much of the certification process as possible, will provide significant advantages and will ensure we have the safest and most affordable systems possible."

For more information about NASA's certification efforts for crewed missions to the International Space Station, visit: