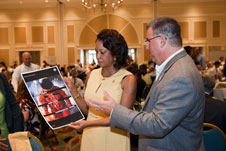 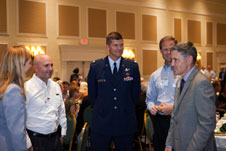 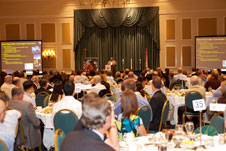 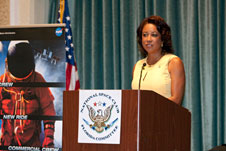 Charles Lindbergh made the world a smaller place when he took off in his single-engine "Spirit of St. Louis" plane to embark on the first solo, nonstop flight across the Atlantic Ocean in 1927. NASA continues to make the solar system a smaller place through human and robotic expeditions to low Earth orbit, the moon and distant planets according to the agency's Commercial Crew Program (CCP) Manager Ed Mango.

"We are on the threshold of creating many more Lindbergh moments," Mango said during the National Space Club Florida Committee's August luncheon at the Radisson Resort at the Port in Cape Canaveral, Fla., on Aug. 14.

As the club's guest speaker, Mango described how the U.S. continually taps into its innovative spirit to make seemingly impossible missions possible, from routinely providing transatlantic passenger flights aboard commercial airliners in the mid-1950s, to astronaut John Glenn's first orbital mission in '62 and NASA's Apollo 8 mission around the moon in '68.

"STS-1, in 1981, became access to low Earth orbit, became a truck to get hardware, experiments and astronauts to space," said Mango, "and because of that great capability, we now have a cathedral in space called the International Space Station, an unbelievable capability that this nation helped put together."

About 350 space club members and guests learned about the efforts of NASA and CCP as they work to close the gap of safe, affordable and reliable U.S. commercial crew space transportation capabilities to and from low Earth orbit and the space station. Mango was joined by Florida's Lt. Gov. Jennifer Carroll, who talked about the positive impacts the aerospace industry has on the Sunshine State.

"In Florida, we have been focused on building the commercial space industry," Carroll said. "Florida's aerospace and aviation industry accounts for $17.8 billion. That is huge. That accounts for over 10 percent of our revenue in the state."

Carroll also is the chair of Space Florida, an organization created to strengthen Florida’s position as a global leader in aerospace research, investment, exploration and commerce. NASA's newest commercial partners are adding to the state's aerospace allure by building on existing infrastructure or beginning to establish operations at Kennedy Space Center and Cape Canaveral Air Force Station.

"They will be competing, there's no doubt, but we have great minds, great skill sets, and I thank you very much for seeing that Florida is the place to do space and space exploration activities," Carroll said.

Under the Commercial Crew Integrated Capability (CCiCap) initiative, The Boeing Company, Space Exploration Technologies (SpaceX) and Sierra Nevada Corp. (SNC) will spend the next year and a half bringing their spacecraft and launch vehicles closer to full-scale fabrication, assembly, integration and flight testing. Mango said the last time NASA reached a critical design review (CDR) state for human space transportation was with the space shuttle in 1975.

"That's our goal here with our CCiCap activities," Mango said. "By the middle of 2014, we will have multiple partners that will be at a critical design state and then they can compete for what we need for the NASA mission."

After commercial human spaceflight capabilities are matured, they're expected to be available to the government and other customers. Throughout the next few years, NASA also will be ensuring systems are meeting the agency's safety and mission requirements prior to contracting astronaut services to the station. Beginning certification now, Mango said, will help reduce the risk of technically challenging or costly redesigns in the future.