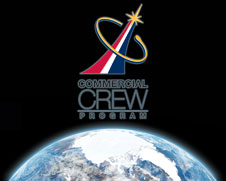 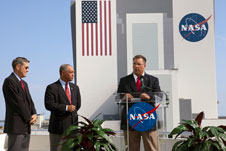 In 2010, President Barack Obama set the agency on a course to provide new transportation into space for its astronauts, while expanding human presence beyond low Earth orbit and enabling new missions of exploration across the solar system.

NASA's Commercial Crew Program (CCP) was formed to facilitate the development of a U.S. commercial crew space transportation capability with the goal of achieving safe, reliable and cost-effective access to and from the International Space Station and low Earth orbit.

With support from CCP, U.S. industry is building new commercially developed spaceflight capabilities and enabling new jobs, all of which could ultimately lead to the availability of commercial human spaceflight services for government and commercial customers.

NASA expects to bridge the American spaceflight gap left by the retirement of the Space Shuttle Program and begin buying seats on U.S. commercial space systems near the middle of the decade.

Before NASA would begin using a commercially developed system to transport its astronauts to and from the Space Station, the system must be certified as meeting NASA’s safety requirements throughout an entire mission cycle. Certification of commercial systems for NASA transportation missions will be pursued in a future, separate phase under the CCP.

NASA's Commercial Crew Development Round 1 (CCDev1) began in 2010 using American Recovery and Reinvestment funds. During that phase, NASA awarded a total of $50 million to five companies for the development of commercial space transportation concepts and enabling capabilities.

Under the CCP, seven companies made even more progress as they designed, developed, tested and reviewed their systems during Commercial Crew Development Round 2 (CCDev2), which now is nearing completion.

NASA will build on its rich human spaceflight history by investing in commercial development of fully integrated crew transportation system designs under the next round of funded SAAs, Commercial Crew Integrated Capability (CCiCap).

The agency announced today that it plans to invest in three companies as they advance multiple integrated transportation systems, which could ultimately transport humans to low Earth Orbit.

NASA's partners will perform tests and mature integrated designs. This would then set the stage for a future activity that will launch crewed orbital demonstration missions to low Earth orbit by the middle of the decade.

In parallel to its commercial space initiatives, NASA is developing the Orion Multi-Purpose Crew Vehicle spacecraft and Space Launch System -- a crew capsule and heavy-lift rocket that will provide an entirely new capability for human exploration beyond low Earth orbit.