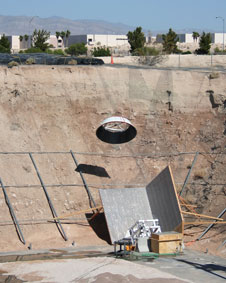 Image above: The Boeing Company performs a jettison test of its forward heat shield, which will protect the parachutes of the company's CST-100 spacecraft during trips to and from low Earth orbit.
Image credit: Boeing
› Larger image

Image above: This is an artist's conception of The Boeing Company's CST-100 spacecraft, under development in collaboration with NASA's Commercial Crew Program.
Image credit: Boeing
› Larger image

The Boeing Company recently completed a jettison test of its forward heat shield, which will protect the parachutes of the company's CST-100 spacecraft during future missions to and from low Earth orbit. The forward heat shield jettison will start the parachute deployment sequence and provide a safe landing for the capsule and its crew members. The test was part of Boeing's work supporting its funded Space Act Agreement (SAA) with NASA's Commercial Crew Program (CCP) during Commercial Crew Development Round 2 (CCDev2).

"Without the parachutes, the crew wouldn’t survive landing. We need to slow them down to a safe landing velocity," said Mike Burghardt, director of Spacecraft Development for Boeing's CST-100. "It is key to be able to get that forward heat shield released at the right time so we can deploy the parachutes."

Testing of the composite-based forward heat shield took place at Bigelow Aerospace's headquarters outside of Las Vegas on June 5, 7 and 11. Surrounded by dry mountain air, Burghardt and his team set up a series of high-speed and high-definition cameras to capture the shield's deployment, a sequence that begins with four piston-like thrusters firing at an altitude of between 20,000 and 30,000 feet. Once the thrusters fire, they are designed to push the shield out of the way of the spacecraft, allowing the drogue parachute to deploy to stabilize the descending crew module followed by the three main parachutes.

"The joint is designed so it won't break when exposed to nominal loads. However, if we did have a thruster failure case, the joint would break to allow the heat shield to be jettisoned from the spacecraft," Burghardt said.

The shield is an adaptation of what Boeing used for its Apollo moon capsules and is similar to the design NASA's Orion spacecraft will use for human exploration missions to deep space.

In March 2011, the agency signed a $92.3 million SAA with the company for the continued development of its Crew Space Transportation (CST), which is a reusable, capsule-shaped spacecraft designed to carry up to seven people, or a combination of people and cargo to low Earth orbit. Optional milestones valued at $20.6 million also were approved and will be completed later this year.

Boeing also tested the CST-100 service module propellant tanks on July 2 to make sure they can handle the extreme requirements of a launch abort scenario.

"The earlier you can do testing and the more testing you do accelerates what you learn," Burghardt said. "There's nothing like building something and then going to test it to find something you didn't think you knew about or you didn't remember."

Boeing will have the opportunity to conduct more testing on its CST-100 during NASA's Commercial Crew Integrated Capability (CCiCap) phase, which began earlier this month with three American companies that are advancing integrated spacecraft and launch vehicle designs. Boeing partnered with United Launch Alliance to integrate its capsule with an Atlas V rocket for launches to complete its integrated Commercial Crew Transportation System. CCiCap will set the stage for a crewed orbital demonstration mission in 2016, the start of operations that will lead to providing commercial transportation services to the agency to send crews to the International Space Station.