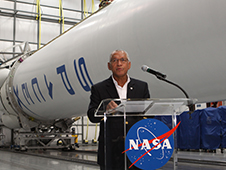 NASA Administrator Charles Bolden announced Thursday new milestones in the nation's commercial space initiatives from the agency's Kennedy Space Center in Florida. The latest advances made by NASA's commercial space partners pave the way for the first contracted flight of cargo to the International Space Station (ISS) this fall and mark progress toward a launch of astronauts from U.S. soil in the next 5 years.

"We're working to open a new frontier for commercial opportunities in space and create job opportunities right here in Florida and across the United States," Bolden said. "And we're working to in-source the work that is currently being done elsewhere and bring it right back here to the U.S. where it belongs."

Through the COTS program, NASA provides investments to stimulate the American commercial space industry. As part of its COTS partnership, SpaceX became the first commercial company to resupply the space station in May, successfully launching its Falcon 9 rocket and Dragon spacecraft to the orbiting complex. During the historic mission, the Dragon was captured by astronauts using the station's robot arm, unloaded and safely returned to Earth carrying experiments conducted aboard ISS. Later this winter, Orbital Sciences Corp. plans to carry out its first test flight under COTS.

CCiCap is an initiative of NASA's Commercial Crew Program (CCP) and an Obama administration priority. The objective of the CCP is to facilitate the development of a U.S. commercial crew space transportation capability with the goal of achieving safe, reliable and cost-effective access to and from the space station and low Earth orbit. After the capability is matured, it is expected to be available to the government and other customers. NASA could contract to purchase commercial services to meet its station crew transportation needs later this decade.

While NASA works with U.S. industry partners to develop commercial spaceflight capabilities, the agency also is developing the Orion spacecraft and the Space Launch System (SLS), a crew capsule and heavy-lift rocket to provide an entirely new capability for human exploration. Designed to be flexible for launching spacecraft for crew and cargo missions, SLS and Orion will expand human presence beyond low Earth orbit and enable new missions of exploration across the solar system.