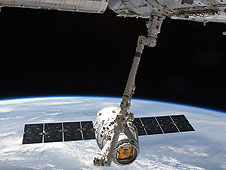 Image above: The SpaceX Dragon capsule pauses near the International Space Station so the robotic arm can grapple and berth it to a port on the station. Photo credit: NASA
› View larger image 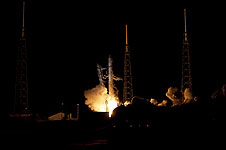 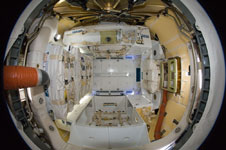 Image above: A look inside the Dragon cargo capsule after it was connected to the International Space Station. Photo credit: NASA
› View larger image

SpaceX completed a landmark mission May 31 that saw its Dragon capsule deliver half-a-ton of supplies and equipment to the International Space Station and return safely to Earth.

The flight made history as the first privately built spacecraft to rendezvous with the International Space Station. Its true impact is expected to be seen in coming months as the company sends regular re-supply missions to the orbiting outpost and continues work to launch astronauts into orbit in a few years.

"We are hoping to continue working with NASA and hopefully flying crew within three years," said Elon Musk, the founder, CEO and chief designer for the Hawthorne, Calif.-based Space Exploration Technologies, better known as SpaceX. "This was a crucial step and makes the chances of becoming a multi planet species more likely."

NASA engineers worked closely with SpaceX throughout preparations for the uncrewed demonstration mission.

"As a country, we should be very proud," said Mike Suffredini, NASA International Space Station program manager. We took a capability that this agency has nurtured over many years, combined that with a different thought process in spacecraft design and created a team that worked very well. The SpaceX team learned a lot and so did our NASA engineers."

The SpaceX mission combined the goals of two separate flights under NASA's Commercial Orbital Transportation Services Program, known as COTS. Originally slated to fly by the station and then come back to Earth, SpaceX and the NASA agreed to let the Dragon connect to the laboratory as long as a string of performance tests were successful.

SpaceX launched the Dragon capsule on top of the company's Falcon 9 rocket at 3:44 a.m. EDT on May 22 to begin the chase of the space station. Working with an instantaneous launch window, the SpaceX launch team executed a flawless countdown that culminated with the Falcon lifting off from Space launch Complex-40 at Cape Canaveral Air Force Station in Florida.

The Dragon began accomplishing a long list of operational "firsts" soon after reaching space, including the first use of the trunk, a small module attached to the bottom of the capsule. The trunk holds a pair of solar arrays that generate electricity for the Dragon capsule. On operational missions, the trunk can be loaded with cargo that can be exposed to the vacuum of space.

Doors on the Dragon opened as-planned to reveal the navigation instruments and other hardware the spacecraft would need to pick out the International Space Station in the void of space and then fly to it.

The first approach came on day three of the mission, when Dragon steered itself around the station remaining 1.5 miles clear. Numerous tests were run on the spacecraft and its communications with the crew on the station.

Astronaut Don Pettit guided the historic link-up the next day, Friday, May 25, when he reached the station's 32-foot-long robotic arm, Canadarm 2, out to the Dragon as it hovered near the station.

"Looks like we caught a Dragon by the tail," the astronaut radioed from the station to ground controllers in Houston and at SpaceX's Hawthorne control center after the arm connected to a fitting on the side of Dragon.

Pettit steered the capsule to the Earth-facing port on the Harmony module while fellow station crewmember Joe Acaba locked the hatches together. The crew unloaded the Dragon's cargo over the weekend and placed used equipment back inside for the return to Earth. The Dragon is the only cargo-carrying spacecraft designed to return safely to the planet rather than burn up in the atmosphere.

"We all remember the transcontinental railroad that opened the Western frontier," Pettit told reporters. "It was celebrated and completed by a golden spike. This is kind of the equivalent. No one remembers who pounded it in, but its completion was important and remembered."

Reversing the process a few days later, Pettit pulled Dragon away from its port on May 31 and released it to fly on its own again. As planned, the Dragon fired its thrusters to move away from the station's vicinity. Dragon released the trunk and its solar arrays before turning its heat shield toward Earth for the fiery plunge through the atmosphere.

Descending under a canopy of parachutes, the Dragon splashed down hundreds of miles west of Baja California to be recovered by ships and taken to port.

Musk said the ambitious mission should ease concerns people had about the rocket, spacecraft and future plans.

"There was reason to doubt that we would succeed because there wasn’t a precedent for what we achieved," Musk said. "I think those reasons no longer remain having done what we have done so I hope those doubts are put to rest."