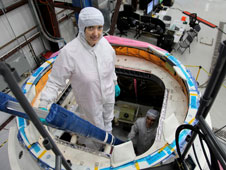 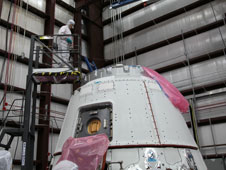 In preparation for the upcoming SpaceX demonstration flight, NASA astronaut Megan McArthur performed a crew equipment interface test March 28 in Florida. The test was part of current prelaunch preparations for the scheduled April 30 liftoff of the SpaceX Falcon 9 rocket. McArthur worked together with SpaceX flight controllers for five hours in their hangar at Cape Canaveral Air Force Station's Space Launch Complex-40, as the team entered its final phase of testing the Dragon capsule. The SpaceX launch is part of NASA's Commercial Orbital Transportation Services partnership with U.S. industry.

The interface test, known as CEIT, is an activity that dates back to the Space Shuttle Program, when it provided a training opportunity to prepare astronauts still on Earth for their missions in space by working with the actual hardware they would use.

The purpose of the CEIT was to give astronauts, payload integration personnel and SpaceX engineers a final opportunity to test and familiarize themselves with the Dragon spacecraft. The Dragon is as close to flight configuration as possible for the upcoming launch while still undergoing final equipment integration and testing on the ground. The exercise provides astronauts and engineers the opportunity to assess the compatibility of the equipment and systems aboard the Dragon with the procedures to be used by the flight crew and flight controllers.

This was the final opportunity for the astronauts, represented by Mission Specialist Megan McArthur, and spacecraft engineers for the upcoming flight to check the capsule's equipment and its associated interfaces. Flight controllers were able to walk through the procedures they will use once the Dragon is berthed at the International Space Station.

McArthur spent 13 days in space, having served as a crew member aboard shuttle Atlantis on the STS-125 mission, which was the final servicing mission to the Hubble Space Telescope.