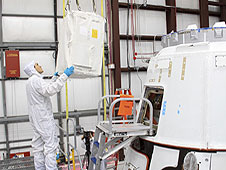 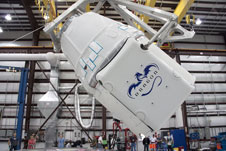 Image above: The Dragon capsule is rotated into position during processing ahead of its demonstration mission to the International Space Station. The spacecraft will launch into space aboard a Falcon 9 rocket. Both the launcher and spacecraft are made by SpaceX. Photo credit: NASA/Jim Grossmann
› View larger image

The Dragon spacecraft built by SpaceX will head to the International Space Station with about 1,200 pounds of cargo during its demonstration mission, including commemorative patches and pins, 162 meals and a collection of student experiments.

Since the company's rocket and spacecraft are conducting a test flight, the manifest attests to important goods for the station's crew of astronauts and cosmonauts, but not mission-critical items.

A successful flight, due to liftoff from Cape Canaveral Air Force Station, Fla.,at 4:55 a.m. EDT on May 19, is expected to lead to regular cargo missions that will carry a wider range of goods to the orbiting laboratory. Hawthorne, Calif.-based SpaceX, formally known as Space Exploration Technologies, is also deep into the work required to make Dragon suitable to carry people into orbit.

The mission is a landmark because it is the first time a privately built spacecraft will head to the International Space Station. The flight, which includes no crew members other than those already on the station who will guide Dragon's arrival, carries enormous challenges and involves numerous individual evaluations.

Most of the cargo's weight, 674 pounds, is in food and crew provisions, including the meals, crew clothing and batteries and other pantry items. A laptop and its accompanying accessories will also make the journey.

Tucked inside the Dragon capsule are two NanoRacks dedicated to student experiments that will study a range of microgravity-related areas from microbial growth to water purification.

The mission calls for the 18-foot-high Dragon to approach the station after its sensors and navigation systems are checked out thoroughly. The spacecraft will go through numerous tests during the third day of the flight as it passes within about 1.5 miles of the station. Communications networks from the spacecraft to the station will be evaluated during this phase, too.

On the fourth day of the mission, the spacecraft will perform a methodical approach to the space station. It will first fly around the station at more than 6.2 miles and then fly under it no closer than 1.6 miles. With navigation units on the spacecraft and station relaying information, the Dragon will approach slowly from beneath the station, pausing at several stages as systems are continually checked.

The crew aboard the space station will take command of Dragon briefly to test the capsule's ability to retreat from the station. The spacecraft will later move to a position about 700 feet from the station so controllers can determine whether it is safe to allow a closer rendezvous.

Assuming a "go" is given, the Dragon will close to within 98 feet of the station and pause again. The next step will bring Dragon to about 32 feet from the station, within reach of the robotic arm. Expedition 31 crewmember Don Pettit will steer the arm to latch onto the cargo craft and connect it to the Harmony module.

The station crew will unpack the Dragon during the next two weeks and load Dragon with more than 1,400 pounds of used scientific and spacewalking gear. Dragon will then be removed from the station by the arm and released to fly back to Earth.

Unlike the other cargo vehicles that resupply the station, the SpaceX craft is designed to return to Earth safely instead of burning up in the atmosphere. That means experiments and other equipment can be stowed inside the capsule and returned to scientists.