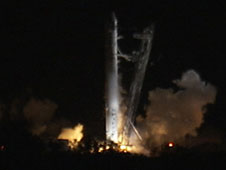 Image above: The SpaceX Falcon 9 rocket ignites its nine engines for a few seconds before shutting them down. Photo credit: NASA TV
› View larger image

A SpaceX Falcon 9 aborted its launch May 19 moments after its engines ignited when computers detected higher pressure readings than allowed. The center engine pressure built above limits and a shutdown occurred one-half second before liftoff, SpaceX officials said.

The next launch attempt could come as early as Tuesday, May 22, but that determination won't be made until the engine itself is inspected, said Gwynne Shotwell, president of Space Exploration Technologies of Hawthorne, Calif., known as SpaceX. There also is an opportunity May 23.

"We had a nominal ignition for all nine (engines)," Shotwell said. "Engine 5 started fine and (its chamber pressure) started trending high."

She said the high pressure could be the result of high temperatures possibly from too little fuel flowing into the engine, though it is too early to know for sure. "We're going to have to spend more time looking at the data."

The rocket was poised on Space Launch Complex-40 at Cape Canaveral Air Force Station, Fla., Saturday morning for the attempt. Its hangar is next to the launch pad. Shotwell said the company is prepared to take the engine out of the rocket if it needs to and put in an engine already at the Cape.

The goal of the mission is to launch a SpaceX Dragon capsule to the International Space Station to demonstrate cargo delivery using privately built spacecraft. It will be a landmark accomplishment because no privately constructed spacecraft has docked with the orbiting laboratory.

NASA is working closely with SpaceX under the provisions of the Commercial Orbital Transportation Services contract.

"We're ready to support when SpaceX is ready to go," said Alan Lindenmoyer, NASA's manager of the Commercial Crew and Cargo Program.