Grow Text SizeShrink Text Size
Past and Present: Field Testing For the Moon
“We Choose to Go to the Moon.” 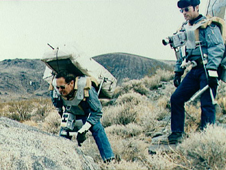 When President Kennedy announced on May 25, 1961, that the United States would go to the moon before the end of the decade, life and work at NASA changed in monumental ways.

By then, NASA had four manned spaceflights under its belt. A trip to the moon would leverage years of spaceflight knowledge, but traveling out of low Earth orbit, past Geosynchronous orbit to the moon, would demand increased launch and crew vehicle capabilities.

The 3-year-old space agency would need to simultaneously develop lunar surface systems – extravehicular space suits, tools, communication systems and lunar rovers. NASA would also have to train its astronauts to land on the moon, navigate the surface and gather samples – all while documenting each step as the world anxiously waited.

But how on Earth – literally – would NASA prepare its astronauts for the three-day, 250,000-mile trip and subsequent landing, exploration and extravehicular activities on the lunar surface? 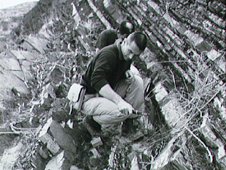 The answer was Geology Field Trips (GFTs). GFTs were conducted at remote locations that were chosen because geology, terrain or climate characteristics were similar to the moon’s surface. In 1963, NASA sent Buzz Aldrin, Neil Armstrong and Michael Collins on a preliminary GFT at Cinder Lake near Flagstaff, Arizona. The three former military pilots practiced sample collection with special tools and used state-of-the-art communication systems.

In 1969, just eight years after President Kennedy’s monumental announcement, NASA sent three well-trained astronauts to the moon and returned them safely back to Earth.


“Embody a Sustainable Course of Long-term Exploration.”
In 2004, another historic presidential announcement declared that the United States would not only go back to the moon, but would also establish a sustained human presence there in preparation for further exploration into our solar system.

NASA engineers, scientists and astronauts once again began to evaluate vehicle architectures and surface systems that would enable this new goal to become a reality.

Apollo GFTs and lunar missions provided valuable data as NASA began preparation for the next generation of space exploration. New requirements and technological advances, however, demanded a new era of GFTs, called analog missions this time around.

Many of the same Apollo GFT locations are used for today’s analog missions. To date, analog locations include Florida, Arizona, Hawaii, Washington, Antarctica and Canada. 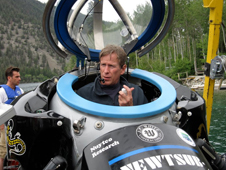 During these long-duration missions, NASA executes a range of undersea “moon walks” that provide astronauts with a realistic approximation of situations they will likely encounter on the moon. These simulations help astronauts understand how to execute daily operations in a simulated partial gravity environment.

Habitat Evaluation
Antarctica
NASA completed a range of analog tests in Antarctica to evaluate the inflatable lunar habitat. The tests were conducted at McMurdo Station in the cold, isolated landscape of Antarctica to provide information about the structure’s power consumption and resilience. The analog also evaluated how easily a suited astronaut could assemble, pack and transport the habitat. If selected for future missions, the structure will reduce the amount of hardware and fuel necessary for transportation and logistics on the moon. 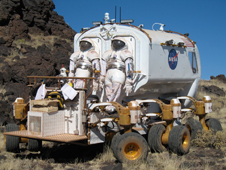 Black Point Lava Flow, Arizona – Phase 2
The terrain and size of Black Point Lava Flow provide an environment geologically similar to the lunar surface. It is here that NASA first introduced the Lunar Electric Rover, a conceptual vehicle with an extended range and the capability to travel rugged planetary terrain. The Black Point landscape enables the rover to undertake sorties (short field excursions) with ranges that extend greater than 10 kilometers (6.2 miles). The sorties tests include a 3-day exploration mission.

In-situ Resource Utilization
Hawaii
The volcanic terrain, rock distribution and soil composition of the Hawaiian islands provide an ideal simulated environment to identify a process to harness local (in-situ) resources for use in human and robotic exploration. The demonstrations help reduce risk to lunar missions by demonstrating technologies for end-to-end oxygen extraction and separation from the volcanic material, oxygen storage, and other technologies that could be used to look for water or ice at the lunar poles. 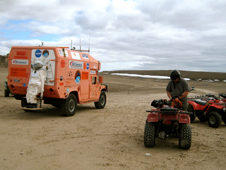