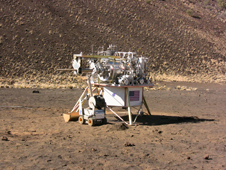 The PILOT system is shown with Lockheed Martin's Bucketwheel on a lander the size of the Phoenix spacecraft currently on Mars. PILOT could produce up to one quarter of the oxygen needed to sustain a crew of four on the moon.
› View hi-resolution image 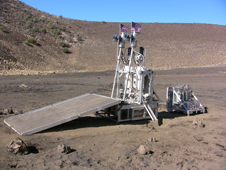 ROxygen could produce two thirds of the oxygen needed to sustain a crew of four on the moon.
› View hi-resolution image NASA has concluded nearly two weeks of testing equipment and lunar rover concepts in Hawaii. The islands’ volcanic terrain, rock distribution and soil materials provide a high-quality simulation of the moon's polar region. One of many field demonstrations developed by NASA’s Exploration Technology Development Program, these tests provides valuable information and help engineers and scientists spot complications that might not be obvious in laboratories.

The agency's In Situ Resource Utilization Project, which studies ways astronauts can use resources found at landing sites, demonstrated how people might prospect for resources on the moon and make their own oxygen from lunar rocks and soil. NASA's lunar exploration plan currently projects that on-site lunar resources could generate one to two metric tons of oxygen annually. This is roughly the amount of oxygen that four to six people living at a lunar outpost might breathe in a year.

ROxygen and PILOT, or Precursor ISRU Lunar Oxygen Testbed were two technologies that were tested. The two large, complementary systems might produce oxygen from soil on an outpost-sized scale.

A prototype system combines a polar prospecting rover and a drill specifically designed to penetrate the harsh lunar soil. The rover's system demonstrates small-scale oxygen production from regolith. A similar rover could search for water ice and volatile gases such as hydrogen, helium, and nitrogen, in the permanently shadowed craters of the moon's poles. Carnegie Mellon University of Pittsburgh built the rover, which carries equipment known as the Regolith and Environment Science and Oxygen and Lunar Volatile Extraction (RESOLVE).

Other tested concepts include a NASA-developed robotic excavator known as Cratos; a new lunar wheel developed by Michelin North America of Greenville, S.C.; a lunar sample coring drill the Northern Centre for Advanced Technology in Canada developed for NASA with support from the Canadian Space Agency, or CSA; an excavator developed by Lockheed Martin of Denver; and a night vision camera called TriDAR for the rover's navigation and drill site selection. Neptec in Canada developed the camera with support from CSA. The tests were hosted by The Pacific International Space Center for Exploration Systems, or PISCES, headquartered at the University of Hawaii, Hilo.

Additional instruments that were field tested will be used to improve understanding of minerals found on the moon. They include a Mossbauer spectrometer from NASA's Johnson Space Center in Houston and the University of Mainz in Germany; an X-ray diffraction unit called mini CheMIN from NASA's Ames Research Center at Moffett Field, Calif., and the Los Alamos National Laboratory in New Mexico; and a handheld Raman spectrometer CSA provided.