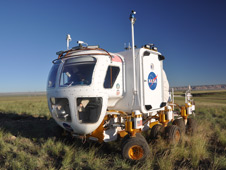 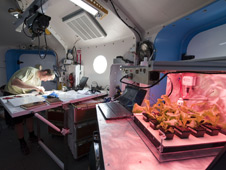 NASA's Desert RATS – or Research and Technology Studies – made their 13th trip to the desert from Aug. 31 - Sept. 15, 2010 for another round of analog testing. The Desert RATS tests offer a NASA-led team of engineers, astronauts and scientists from across the country an opportunity to come together to conduct technology development research in the Arizona desert. The location offers a good stand-in for destinations for future planetary exploration missions.

In addition, a variety of independent supporting technology elements, including navigation systems to help guide spacewalkers and both solar and wind-powered equipment, were demonstrated and tested.

For the second year, the Challenger Center for Space Science Education participated in Desert RATS through education and public outreach activities, including live webcasts and reports from the field. This participation was supported by the Coalition for Space Exploration and facilitated by a Space Act Agreement with NASA.

The Challenger Center's activities were powered by the GSW-7000, a large portable solar/wind generating system which also served as a cell phone node and provided WiFi/WiMAX connectivity. The GSW-7000 was donated to Challenger Center by Green Trail Energy, Inc., and was also used during Desert RATS in both 2009 and 2010 to recharge NASA hardware.

During this mission, four crew members lived in the two rovers. Their traverse routes included driving up and down steep slopes and over rough terrain at various speeds. The crew also demonstrated docking and undocking with the PUPs and the habitat. Other objectives for the rovers included demonstrating the differences in productivity for crew members and their ground support that come with different communication methods, and evaluating different operational concepts for the trips the rovers make.

The ATHLETE System, which consists of a pair of Tri-ATHLETE rovers, was remotely controlled both in Arizona and from Houston to demonstrate long-traverse operations during lunar time delays and portable local operations from the personnel in Arizona.

The Habitat Development Unit was used to evaluate the geosciences laboratory in conjunction with the sample collections and to assess the spacesuit maintenance area inside. This team also focused on procedures for keeping out the dust, the effects on the overall integrated communications and data system and how easy the habitat is for people to use.