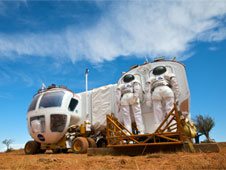 Lunar Electric Rover docking with Cabin A for a simulated rescue mission. This simulated mission was part of the 2009 Desert RATS - or Research and Technology Studies, held at Black Point Lava Flow in Arizona. Image Credit: NASA 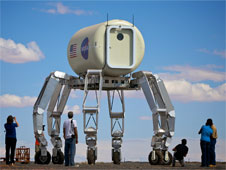 The Tri-ATHLETE heavy lift rover with a HAB module attached and ready to place where needed. Image Credit: NASA

Each year, the Desert "RATS," or Research and Technology Studies field test offers a chance for a NASA-led team of engineers, astronauts and scientists from across the country to come together to conduct technology development research in the Arizona desert. The location offers a good stand-in for destinations for future planetary exploration missions.

Desert RATS helps determine what technologies and capabilities will be needed when NASA takes future trips beyond Earth. The tests included a simulated 14-day mission during which two crew members -- an astronaut and a geologist -- lived inside NASA's prototype Lunar Electric Rover.

More than 85 engineers from eight NASA centers ventured to the Arizona desert with three different robots – rovers, scouts and heavy lifters – to simulate the two-week expedition to explore the lunar surface. Two crew members routinely ventured out with the use of simulated spacesuits to gather geological samples and get closer looks at scientific points of interest. They scouted the test area for features of geological interest and conduct simulated moonwalks to collect samples.

NASA's heavy-lift rover Tri-ATHLETE, or All-Terrain Hex-Legged Extra-Terrestrial Explorer, carried a logistics module mockup to which the lunar rover could dock. Two months prior to the simulated 14-day mission, two K-10 robots scouted various traverse paths ahead of the rover to tentatively locate the best areas of scientific interest for the crew to drive to and visit. Various surface navigational technologies and surface operational concepts were demonstrated or tested to understand what capabilities may be needed to explore the surfaces of the moon and Mars.