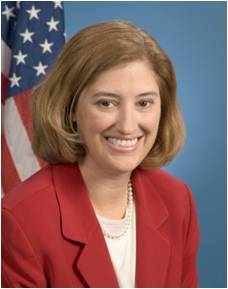 Prior to joining ESMD, Dr. Leshin served as the Deputy Center Director for Science & Technology at NASA’s Goddard Space Flight Center from 2007 to 2009. She oversaw strategy development at NASA Goddard, leading an inclusive process to formulate future science and technology goals, and an integrated program of investments aligned to meet those goals. With other NASA Goddard senior managers, she was responsible for effectively executing the Centers’ $3B in Programs, and ensuring the scientific integrity of Earth observing missions, space-based telescopes such as the James Webb Space Telescope, and instruments exploring the Sun, Moon, Mercury, Mars, Saturn, comets and more. She first joined NASA Goddard in August 2005 as the Director of Sciences and Exploration.

Since joining NASA Dr. Leshin has been deeply involved in planning of NASA’s exploration programs through participation in the formulation of the Global Exploration Strategy and several Lunar Architecture Teams. In 2009, she led the NASA Innovation and Technology Study Group, an Agency-wide team that made recommendations on how NASA could increase focus on innovative activities and technologies needed to advance the agency’s mission.

In 2004, Dr. Leshin served on President Bush’s Commission on Implementation of United States Space Exploration Policy, a nine-member commission charged with advising the President on the execution of his new Vision Space Exploration. Before joining NASA, Dr. Leshin was The Dee and John Whiteman Dean’s Distinguished Professor of Geological Sciences, and the Director of the Center for Meteorites Studies at Arizona State University. She currently serves on the Board of Directors of Women in Aerospace and on the Council of the American Geophysical Union.

Dr. Leshin received the NASA Distinguished Public Service Medal in 2004. In 1996, she was the inaugural recipient of the Meteoritical Society's Nier Prize, awarded for outstanding research in meteoritics or planetary science by a scientist under the age of 35. The International Astronomical Union recognized her contributions to planetary science with the naming of asteroid 4922 Leshin.

Dr. Leshin’s scientific expertise is in cosmochemistry. She is primarily interested in deciphering the record of water on objects in our solar system. She has published over 40 scientific papers. She received her B.S. in Chemistry from Arizona State University, and her Ph. D. in Geochemistry in 1994 from California Institute of Technology.