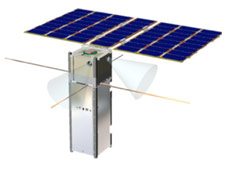 ISARA will demonstrate a radio communication system that dramatically boosts the amount of data that the small satellite can transmit by using the back of its solar array as a reflector for the antenna. This three-unit CubeSat will be funded at approximately $5.5 million with launch expected in two years. 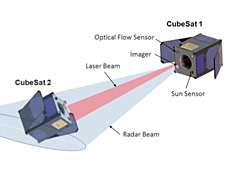 This pair of 1.5-unit CubeSats will demonstrate a laser communication system for sending large amounts of information from a satellite to Earth and also demonstrate low-cost radar and optical sensors for helping small spacecraft maneuver near each other. The mission is expected to take two years and $3.6 million to develop and operate.

Two three-unit CubeSats will demonstrate rendezvous and mechanical docking of small spacecraft in orbit. This project is expected to take three years and approximately $13.5 million in funding to develop, launch and operate. Partners on the project include Applied Defense Solutions Inc. of Columbia, Md., 406 Aerospace LLC of Bozeman, Mont., and California Polytechnic State University of San Luis Obispo.