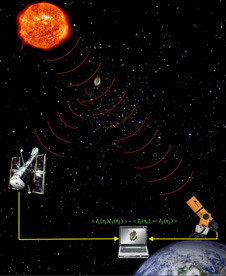 › Larger photo
› Phase I Final Report (PDF)
Ghost imaging is an optical imaging technique that utilizes the correlations between optical fields in two channels. One of the channels contains the object, however lacks any spatial resolution. In the other, empty, channel a space-resolving optical detection is allowed. The image is reconstructed by correlating the signals from two channels. In the original implementation, the channels had to be coupled to quantum-correlated (entangled) optical fields. Later it was shown that this approach could also work with ordinary thermal light (e.g., star light), which also possesses correlation properties. However the ghost imaging geometry remains poorly compatible with the imaging of astronomical objects. Specifically, creating of the correlated optical channels requires a beam splitter to be placed between the source and the object. The study team recently re-examined this requirement and found a possibility to avoid it, therefore potentially opening the doors to the ghost-imaging of distant objects using natural light. The key to the proposed approach is the understanding that an optical mode can be coupled in two channels not only by splitting its amplitude with a beam splitter, but also by sub-mode detection, which occurs naturally when the object is smaller than the transverse coherence length. In Phase-I the team will discuss the requirements arising for this type of ghost imaging and theoretically validate the novel approach.
› Back To Top