Why Do We Explore?

From the time of our birth, humans have felt a primordial urge to explore -- to blaze new trails, map new lands, and answer profound questions about ourselves and our universe.

This Month in Exploration

Visit every month to find out how aviation and space exploration have improved life for humans on Earth and in space. 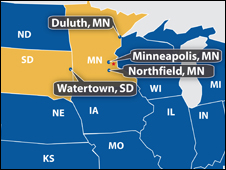 The Exploration Experience was met with an enthusiastic welcome from Minneapolis' Jefferson Community School on October 6. Leading off the event, John Olson of NASA Exploration Systems treated the school of more than 500 students to a presentation and hands-on demonstrations to educate and excited the students about NASA. Throughout the day, students filtered steadily and excitedly through the Exploration Experience. The event made such a splash that even a Minneapolis fire engine stopped by and the Captain and crew were treated to a tour.

Day two of the Minneapolis stop brought a steady drizzle and, unfortunately, some technical difficulties. However, the day was not lost as the trailer staff moved quickly to establish the NASA experience inside the school auditorium. Ares Education Associate, Stephanie Wilson jumped right into educator mode and talked to the children about the Constellation program and how exciting the coming years will be for NASA. Over the two day stop, nearly 700 students and public braved the weather to enjoy NASA rolling into Minneapolis.

Approximately 1,200 people toured the Exploration Experience exhibit at the Great Lakes Aquarium in Duluth, MN Friday, October 10 through Sunday, October 12, 2008. This stop was recommended by Congressman James Oberstar. Visitors of note included Sarah Erickson, Director of Education at the Aquarium and Jack LaVoy, Director of the Aquarium. Sean Melody from Johnson Space Center spoke to about 240 people throughout the weekend on the similarities between NASA and marine science. Victoria Friedensen from NASA Headquarters spoke to more than 1,200 middle school children throughout the week in schools throughout Duluth about NASA’s future plans. Friedensen also spoke to about 30 people at a special event at the Aquarium on Thursday night. Outreach Coordinator Shannon Ridinger was interviewed by the KBJR NBC 6 TV station and it’s sister station, KDLH CBS 3 for a piece on the exhibit that ran during the 5 p.m., 5:30 p.m., and 6 p.m. newscasts. KQDS FOX 21 also interviewed Ridinger for a piece that ran on their evening newscasts.

Approximately 1,130 people toured the Exploration Experience exhibit during South Dakota Space Days in Watertown, SD Thursday, October 16 and Friday, October 17, 2008. Visitors of note included Astronaut Mike Fossum who spoke to over 400 people throughout the two days, and who also visited the exhibit. NASA speaker Jim Simek from Glenn Research Center presented Constellation based activities to about 360 children throughout the two days. NASA speaker Dr. Ray Wheeler spoke to about 300 middle and high school kids about his work with biotechnologies and agriculture. Dr. Jack Bacon from Johnson Space Center also spoke during the evening presentation on Thursday with Astronaut Fossum. Outreach Coordinator Shannon Ridinger was interviewed along with Astronaut Fossum during the live morning show of KWAT, a local radio station in Watertown. Many visitors that came to see the exhibit said they heard about it by listening to the live broadcast. Ridinger was also interviewed by the local ABC affiliate, KABY for a story on the exhibit that ran during their evening newscasts. The Watertown Public Opinion newspaper ran several stories about Space Days that featured the exhibit, including a front page story with picture on Friday, October 17.

+ Exhibit Exploration Trailer
› Back To Top