NASA is moving forward with a new focus for the manned space program.

This Month in Exploration

Visit every month to find out how aviation and space exploration have improved life for humans on Earth and in space.

NASA will celebrate its 50th Anniversary on October 1, 2008. Join us as we celebrate the past and look forward to a promising new era of inspiration, innovation, and discovery. 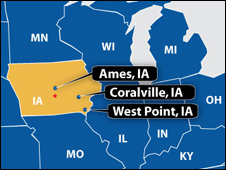 WEST POINT, IOWA, August 7-10 - Under clear skies in a town that has a population of fewer than 1,000, the NASA Exploration Experience opened its doors August 7-10, 2008 to visitors of the 56th annual West Point, Iowa Sweet Corn Festival.

Approximately 2,400 people toured the exhibit over the course of its four-day stay during the festival, which was named one of the Travel Channel's top ten places to visit during its "Taste of America" tour of 2007.

On Sunday, August 10, 2008 Iowa Representative Dave Loebsack visited the NASA Exploration Experience to thank us for visiting West Point and was genuinely excited to see NASA at such an "out of the way place".

CORALVILLE, IOWA, August 13-15 – The next stop on the Iowa tour was the Iowa Children’s Museum in Coralville. Approximately 2,010 people stopped by during the three-day tour, including distinguished visitor, Deb Dunkhase, Executive Director of the museum.

AMES, IOWA, August 26 - 28 - As the final stop of the Iowa State Tour, the NASA Exploration Experience pulled into Ames to visit both the community and a very special guest. Over the 3 day visit over 1,000 people toured the exhibit and got a taste of NASA’s plans to return man to the moon.

“We were particularly excited to come to Ames as it is the home of Kristina Johnson, winner of the 2008 21st Century Explorer Podcast Competition in the 15-18 year old category,” said Rocky Lind, NASA ESMD Information and Communications Coordinator. Kristina continued her winning formula as she used her time at the exhibit to take B roll for her upcoming project featuring the NASA Exploration Experience stopping at her school.

The Ames community was also treated to presentations by NASA Educator John Weis, who spoke to 24 classes and a total of 760 students over his two days in this beautiful city located just 30 miles north of Des Moines.

As a special treat, NASA EDGE made an appearance, featuring Kristina as a Co-host for a future episode and thus making her the youngest Co-host in NASA EDGE history. “She is a natural. I think I may have found Blair’s replacement if he ever accomplishes becoming the first medianaut,” noted Chris Giersch, Host of NASA EDGE.

The Exploration Experience will next be heading north in October to visit communities in Minnesota and South Dakota.

To see where the Exploration Experience has been and where it is going check out the new mapping feature: ESMD Outreach Exhibit Locations.