Grow Text SizeShrink Text Size
NASA Invites Fans to a Tweetup at Glenn Research Center
NASA's Glenn Research Center (GRC) in Cleveland will host a special event on March 2 to celebrate the 50th anniversary of John Glenn's first orbital flight by an American. NASA also will invite 100 total people for a behind-the-scenes Tweetup at GRC in advance of the celebration event.

The activities begin at 7:30 a.m. EST with a tour of Glenn's world-class flight research and ground test facilities that support aeronautics and space exploration. Participants will speak with scientists and engineers about technologies being investigated and developed.

Following the tours, the Tweetup will move to downtown Cleveland for the Glenn tribute event. "Celebrating John Glenn's Legacy: 50 years of Americans in Orbit," will be held at 1 p.m. at Cleveland State University's Wolstein Center. The program will include a video tribute and remarks by Glenn and agency officials. Tweetup participants also will meet astronaut Greg "Box" Johnson, who tweets as @Astro_Box, and other special guests.

NASA’s Glenn Research Center was founded in 1941 by the National Advisory Committee for Aeronautics (NACA), which was the precursor to NASA. On March 1, 1999, the Lewis Research Center was officially renamed the NASA John H. Glenn Research Center at Lewis Field in recognition of Glenn's contributions to science, space and the State of Ohio. As one of the original seven Mercury astronauts, Glenn trained in 1960 at Lewis in the Multiple Axis Space Test Inertia Facility. John Glenn returned to orbit aboard the Space Shuttle Discovery in 1998. 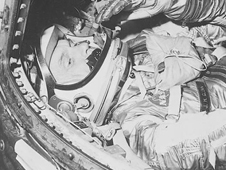 Because NASA Glenn is a government facility with restricted access, the Tweetup is open only to U.S. citizens and lawful permanent residents (lprs). NASA will select 100 total participants, including Twitter followers and their guests, by lottery from those who register online.

What is a tweetup?
A Tweetup is an informal meeting of people who use the social messaging medium Twitter. This Tweetup is an opportunity to learn more about NASA and the agency's Glenn Research Center.

How do I register?
Come back to register between noon EST on Friday, Feb. 3, through noon on Monday, Feb. 6. NASA will select 100 total participants, including Twitter followers and their guests, by lottery from those who register online. Additional registrants may be selected for a waiting list.


Registration is for one person and your guest only, and is non-transferable.

Do I need to have a Twitter account to register?
This event is designed for people who regularly interact with NASA via Twitter to meet in person and discuss one of their favorite subjects: NASA. Registration is open to those who are active Twitter users who follow @NASA, @NASATweetup, @NASAGlenn and other NASA Twitter accounts. The Twitter account for the Tweetup is @NASA, and the hashtag is #NASATweetup.

What are the registration requirements?
Registration indicates your intent to travel to NASA's Glenn Research Center in Cleveland, Ohio and attend the event in person. You are responsible for your own expenses for travel, accommodation, food and other amenities.

NASA Glenn is a government facility with restricted access, so the event is open only to U.S. citizens and lawful permanent residents. To be admitted, you will need to show government-issued photo identification that matches the name provided on the registration. Those without proper identification cannot be admitted. All registrants must be at least 18 years old.

Does my registration include a guest?
Yes, each registrant may also register one guest. Each guest must be a U. S. citizen or lawful permanent resident and at least 10 years old.

What if I cannot come to Ohio?
If you cannot come to NASA's Glenn Research Center in person, you should not register. You can follow the tweetup conversation on Twitter using the #NASATweetup hashtag.

If you cannot make this Tweetup, don't despair; NASA is planning others in the near future at various locations. Check back on http://www.nasa.gov/tweetup for updates.

When will I know if I am selected?
After NASA has received and processed the registrations, an email with confirmation information and additional instructions will be sent to those selected and those on the waitlist. We expect to send selection notifications by email by Tuesday, Feb. 14.

Have a question not answered here? Need more information? Help is available by sending an email to HQ-twitter@mail.nasa.gov.