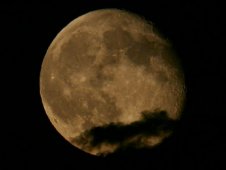 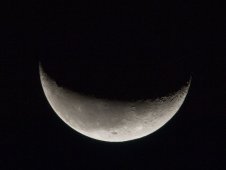 A waning crescent moon is featured in this image photographed by an Expedition 24 crew member on the International Space Station. (NASA) 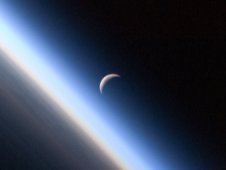 A setting, waning crescent moon amid the thin line of Earth's atmosphere. (NASA)

More Information
› Link: NASA Moon Facts
› Link: Moon FAQ
› Link: Lunar Impacts Mystery has always shrouded the moon, and this celestial body has long held a place in the myths and legends of every culture on Earth.

To educate the public about the moon, NASA and hundreds of enthusiasts around the world will come together on Saturday, Oct. 8, for International Observe the Moon Night. On Thursday, Oct. 6, from 3-4 p.m. EDT, Dr. Renee Weber and Dr. Barbara Cohen of NASA's Marshall Space Flight Center in Huntsville, Ala., answered your questions about the moon and International Observe the Moon Night.

To better understand the moon, NASA is conducting research with missions like the Lunar Reconnaissance Orbiter, or LRO, that has been orbiting the moon since 2009. LRO continues to remotely sense the surface using its seven onboard instruments and has enabled NASA to develop the most extensive map of the lunar surface to date. This and other data will allow NASA to map out areas for future human or robotic exploration. There are spectacular vistas on the lunar surface that no human has yet seen -- and equally spectacular scientific discoveries to be made.

NASA and hundreds of enthusiasts around the world will come together on Saturday, Oct. 8, for International Observe the Moon Night. The event is designed to engage the lunar science and education community, amateur astronomers, space enthusiasts and the general public in an annual lunar observation event to allow them to share in the excitement of lunar science and space exploration.

Prior to the event, Dr. Renee Weber, planetary scientist at NASA's Marshall Space Flight Center in Huntsville, Ala., will be available to answer your questions about the moon and provide information about new and exciting lunar discoveries.

Dr. Renee Weber is a planetary scientist at NASA's Marshall Space Flight Center. She serves as the project scientist for the Lunar Mapping and Modeling Project, a software project designed to provide lunar maps and surface feature information to mission planners and other lunar researchers. Her scientific research focuses on planetary seismology, in particular the re-processing of seismic data from the Apollo missions. She is involved in several international efforts with goals of sending modern, broad-band seismometers to both the moon and Mars.

Dr. Barbara Cohen is a planetary scientist at NASA's Marshall Space Flight Center. She supports NASA in various roles for the next phase of lunar planning, both human and robotic. Barbara's science interests focus on geochronology and geochemistry of planetary samples from the Moon, Mars and asteroids. In pursuit of these interests, Barbara works on the Mars Exploration Rovers Spirit and Opportunity and is currently building a next-generation planetary noble gas laboratory for continued geochronology studies. Dr. Cohen earned a bachelor's degree in geology from the State University of New York at Stony Brook in 1993. She earned a Doctorate in Planetary Sciences from the University of Arizona in 2000.
Kim Newton, 256-544-0371
Marshall Space Flight Center, Huntsville, Ala.
Kimberly.D.Newton@nasa.gov
› Back To Top