Grow Text SizeShrink Text Size
Get Ready for 'Close Encounters' With Mars and the Moon! 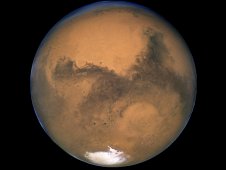 The last weekend of January 2010 promised two very special "close encounters" with our nearest neighbors. Planetary scientist Barbara Cohen at NASA's Marshall Space Flight Center answered your questions online about Mars at Opposition and the "largest" full moon of the year via a live Web chat on Friday, January 29, 2010 for over 90 minutes.

Think of Earth and Mars as two runners on a circular race track, with lanes corresponding to planetary orbits. Earth, running fast on the inside lane, circles the course every 12 months. Mars, chugging along an outside lane, takes twice as long to go around. About every two years, Earth catches up with slower Mars and laps it.

This week Earth will lap Mars again. On Jan. 27, the Red Planet will be only 99 million kilometers away. It will look bigger through a telescope than at any time between 2008 and 2012.

For visual observers, the best view comes on Friday, Jan. 29, when the nearest -- and therefore "largest" -- full moon of the year and Mars congregate for a bright display. On that night, Mars will be directly opposite the sun.

Earth and Mars have close encounters on their cosmic course every 25 months or so. Some are closer than others, however. In 2003, the Earth-Mars distance was only 56 million kilometers, the closest they've come in 60,000 years. The race goes on!

Thanks to all of you for all the great questions, and thanks to our guest scientist, Barbara Cohen! Our Mars Opposition chat is now closed, but you can find more information at Science @ NASA. Check back on Monday for a posted transcript of today’s chat. Have a great weekend.