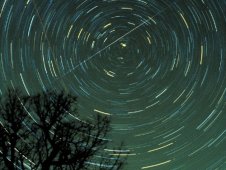 Star trails and a Geminids meteor over Georgia in 1985. Image credit and copyright: Jimmy Westlake

> View 2008 Geminids (Windows, streaming) The Geminids are one of the best meteor showers of the year and never seem to disappoint observers! Bill Cooke of the Meteoroid Environment Office, located at NASA's Marshall Space Flight Center, was online for over 90 minutes in a live web chat on Friday, December 11, 2009 from 3:00-4:00 EST to field questions about the Geminids meteor shower.

This meteor shower gets the name "Geminids" because it appears to radiate from the constellation Gemini. For the best viewing opportunity, go outside, take a blanket and something hot to drink, lay on your back and look up into the night sky. Best viewing time is between midnight and dawn on December 13-14, 2009.

An observer in the Northern hemisphere can start seeing the Geminids meteors as early as December 6, when one meteor every hour or so could be visible. During the next week, rates increase until a peak of 50-80 meteors per hour is attained on the night of December 13-14. The last Geminids are seen on December 18, when an observer might see a rate of one or so every hour.

History of the Geminids

The initial appearance of the Geminids meteor shower came fairly sudden during the 1860s. The first notation of the shower occurred in 1862 at Manchester, England. During the 1870s, observations of the Geminids became more numerous as astronomers realized a new annual shower was active.