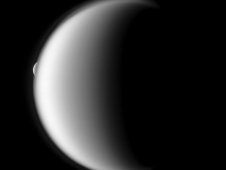 In a dramatic example of occultation, a Saturn moon, Rhea, emerges after being occulted by the larger moon Titan. (NASA/JPL/Space Science Institute) On the evening of July 3 at 11:05:30 p.m. EDT -- at a distance of 280 millon miles into space that poses no threat to Earth -- 52 Europa will pass in front of star TYC 0292-00339-1 in the constellation Virgo. The asteroid will eclipse the star's light for 17.9 seconds in a process known as occultation. Here on Earth, astronomers can measure the exact length of time the star's light is blocked and use those calculations to help verify the size of 52 Europa. They'll also have alive Web chat to discuss how to measure the asteroid 52 Europa on the evening of July 3, 2011, from 9:30 p.m. to midnight EDT. You can view a map of the occultation's path across North America.

Ahead of the live Web chat on July 3, you may already have some questions about occulations, eclipses, transits, and 52 Europe. Below is some information that you may find useful ahead of the event.

What is asteroid 52 Europa?

By volume, asteroid 52 Europa is the seventh largest asteroid in the asteroid belt, with a diameter of about 300 kilometers/186 miles. It was discovered in 1858 by Herman Goldschmidt from his balcony in Paris and named for Europa, a conquest of Zeus in Greek mythology. Highly porous, the asteroid is classified as a dark C-type asteroid, meaning the surface contains a large amount of carbon. This gives 52 Europa a dark surface that reflects only a small amount of light that falls on it.

Generally speaking, what is an occultation? How is that different from an eclipse or transit?

For practical purposes, an occultation is a celestial event in which a larger body covers up a distant object. Compare this to an eclipse, where the bodies are generally nearly equal in angular diameter, and a transit, where a much smaller body passes in front of a large object, such as transits of the sun by Mercury and Venus. During an occultation the occulting body blocks the light of the more distant celestial object.

As an example, when an airplane flies directly between an observer on the Earth's surface and the sun, its shadow passes right over the observer blocking the sun's light momentarily. The airplane has occulted the sun. Now move the observer just 100 meters away, and the airplane's shadow would miss the observer entirely. If the observer had arrived 30 seconds later to that position he or she would not see the occultation of the sun by the airplane.

What is an asteroid occultation?

An asteroid occultation occurs when an asteroid passes directly in front of a star causing the star to disappear for some span of time -- usually from several seconds to a minute or more. An instantaneous drop in the light level of the star of the merged object -- star + asteroid -- can be observed. This fading is caused by the asteroid's own light replacing the light of the brighter star. If the asteroid is too faint to be seen, then the star vanishes completely while the asteroid is in front of it. Asteroid occultation events provide a unique opportunity for ground-based observers to directly determine the sizes and shapes of these mysterious objects.

With thanks to the International Occultation Timing Association's Manual.

Below is a map showing the path of occultation. This event will not be viewable with the naked eye, but you can see it through your telescope -- or visit this NASA page on July, starting at 9:30 p.m. EDT, for a Ustream view of the occultation. The 17.9-second event will occur on July 3 at 11:05:30 p.m. EDT. 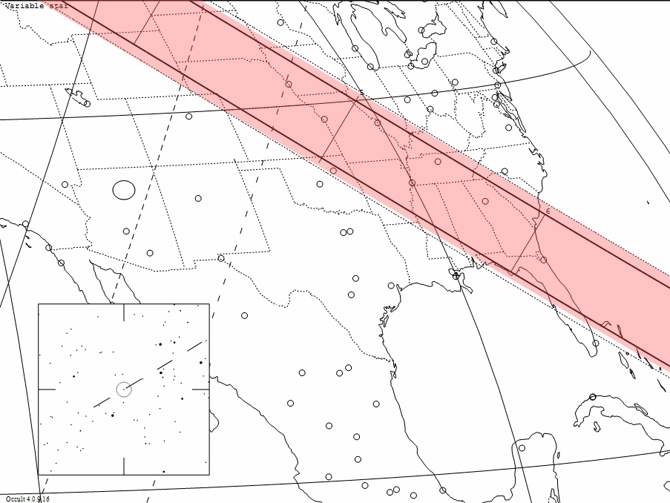