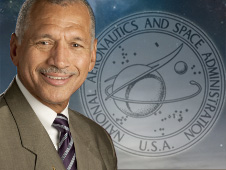 As we prepare to fly the final space shuttle mission to the International Space Station, NASA continues with plans to extend humanity's presence into the solar system by developing a new heavy lift rocket and crew capsule to take astronauts beyond low-Earth orbit.

We will use the space station as a test bed and stepping stone for the challenging journey ahead. We are changing the way we do business, fostering a commercial industry that will safely service low Earth orbit so we can focus our energy and resources on sending astronauts to an asteroid and eventually to Mars.

All the while, NASA continues to invest in science missions that study our earth, solar system and beyond, as well as aeronautics research focused on increased safety and reduced economic impact on flight. We're also focused on educating the next generation of technology leaders and investing in high payoff, high-risk technology that industry cannot tackle today.

So despite what you may have heard, the future at NASA holds many exciting opportunities for America's space program.

NASA Administrator Charlie Bolden was online for an hour-long web chat on Tues., July 5, at 3:30 p.m. EDT, where he answered your questions about what NASA's future holds.

Jason (Moderator): We're getting ready here for today's chat. We'll be getting started in a few minutes. Thanks.

Jason (Moderator): Welcome to the chat about the ‘Future of NASA' with Administrator Charlie Bolden. The future at NASA holds many exciting opportunities for America's space program and Administrator Bolden is answering your questions about these opportunities. This is a moderated chat. To submit your own question, please type it in the box at the bottom of the window and click the 'Ask' button on the right side of the box. Thanks for your patience as we answer your questions.

Jason (Moderator): We're working on answering the first few questions. To ask your own, please type it in the box at the bottom of the window and click the 'Ask' button on the right side of the box. Thanks for your patience as we answer your questions.

MattBaker: When will NASA be able to make manned spaceflights after sts-135?

CharlieB: NASA will continue to have manned spaceflights with our next launch being to the International Space Station early this fall. Our intention is to continue the operation of the ISS with American and partner crew members through at least 2020.

John_Singer: Why was the Shuttle-like concept of a re-useable Spacecraft that could take off and land abandoned in favor of Apollo-era capsules?

CharlieB: For deep space exploration, reentry vehicles require the ability to withstand much greater pressure and temperature than present day winged vehicles can take. We expect that for low Earth orbit operations such as transportation to the ISS, at least two of the perspective competitors, Orbital Sciences and Sierra Nevada, have proposed winged vehicles for their designs.

Drew: After the last launch. What's next for NASA?

CharlieB: Immediately following the successful flight of STS-135, and close out of the Shuttle era, attention will turn to facilitating the success of US commercial spacecraft for cargo and crew transportation to low Earth orbit. At the same time, NASA will focus on the design and development of a heavy lift rocket with a multi-purpose crew vehicle to enable us to at long last embark on deep space exploration with humans.

Jason (Moderator): Administrator Bolden is working to answer your great questions. Keep them coming! To submit your own question, please type it in the box at the bottom of the window and click the 'Ask' button on the right side of the box. Thanks for your patience as we answer your questions.

richard_oven: Will NASA now use more research funds to develop alternate forms of rocket propulsion - such as plasma drives, etc.

josh: Matt Pierce w/ ACI, Will the astronauts still be NASA Astronauts or will they be employed by a private contractor such as space x? Seems like the only thing changing is the contractor and the equipment. Is that an accurate assessment Administrator Bolden? Thanks!

CharlieB: As the President has promised, NASA and the nation will continue our leadership in human spaceflight. In doing so, we will continue to maintain a vibrant and involved astronaut corps headquartered at the Johnson Space Center. We currently have several astronauts in the training pipeline, and at the appropriate time we will open up the process for more.

Jason (Moderator): Do you have a question you've been waiting to ask? Go for it! To submit your own question, please type it in the box at the bottom of the window and click the 'Ask' button on the right side of the box. Thanks for your patience as we answer your questions.

2552: Will the SLS design be announced on July 8th as reported by NASASpaceFlight.com? What about the combined SpaceX COTS 2/3 mission?

CharlieB: We're making great progress on the heavy lift rocket - the Space Launch System - and we'll be making an announcement soon. However, it is important to remember that this is one of the most important and most expensive decisions we will make for the next decade, and so I want to make sure we get it right.

jbletheby: what is the goal date for mars

CharlieB: As President Obama announced in his April 15, 2010 address at the Kennedy Space Center, we are targeting the 2030s for our first human flight to Mars.

CHeckmann: When will the MPCV be ready to fly?

CharlieB: In order to make the President's goal of a 2025 mission to an asteroid, it is our expectation that we will have the first version of an MPCV ready for unmanned test flight later this decade.

ukonurk: Do you think human space exploration still is the most important part of NASA?

Jason (Moderator): Administrator Bolden is working to answer your great questions. Keep them coming! To submit your own question, please type it in the box at the bottom of the window and click the 'Ask' button on the right side of the box. Thanks for your patience as he answers your questions.

kvnmn7: Will the ISS ever be retired also?

CharlieB: As provided for in the bipartisan 2010 Authorization Act passed by Congress and signed into law by the President, we are currently working to enhance use of the ISS at least until 2020. We are also focused on going beyond low Earth orbit using the ISS as our springboard.

Ky: Also how good of a chance do we have for launch on Friday?

CharlieB: I am always optimistic and never want to cancel on a weather forecast. I think our chances are pretty good.

Adrian-AstrosaurusRex: What is meant on the NASA website when it says that NASA will be "fostering a commercial industry"? Will projects previously done by NASA be given by the government to private contractors to carry out?

CharlieB: As we have always done, NASA is partnering with the aerospace industry to produce vehicles to provide safe, reliable access to low Earth orbit for astronauts and cargo. Our role now, compared to the Shuttle era, is to be a purchaser of service as opposed to the owner and operator.

Jason (Moderator): We've got a lot of questions here and Administrator Bolden is working to answer them. Thank you for your patience as he answers your questions.

Mdesai: How crucial is inspiring the next generation of engineers and scientists to NASA's future?

CharlieB: If America is to realize the vision of President Obama to out-innovate, out-educate and out-build our competitors, it is essential for NASA to play a key role in the inspiration, recruitment and encouragement of future scientists, engineers and technologists.

adcunningham: What do you hope people say about the "Bolden-era" of NASA when you retire from the position?

CharlieB: When I leave my office as NASA Administrator, it is my hope to leave the Agency well on the way to successful provision of commercial access to low Earth orbit for cargo and crew; stabilized in a development program for deep space exploration vehicles for humans; as strong as ever in leading scientific exploration and development; and better than ever in providing cutting-edge aerospace technologies. It goes without saying that NASA will be a leader in inspiring the youth of America and the world to want to study and enter the fields of science, technology, engineering and math.

Voyager: What are the plans with robotic exploration of the outer solar system?

CharlieB: NASA will continue its robust exploration of the outer solar system with the launch of the Juno spacecraft to Jupiter this coming August, and the New Horizons mission already on its way to Pluto. Other prospective missions to distant reaches of the solar system are also in work.

Jason (Moderator): Administrator Bolden is working to answer your great questions. To submit your own question, please type it in the box at the bottom of the window and click the 'Ask' button on the right side of the box. Thanks for your patience as he answers your questions.

Brian_Nave: What's in the future for the Cape and all the infrastructure there?

CharlieB: By facilitating the development of a commercial capacity for crew and cargo access to low Earth orbit, we help high-tech, high-paying jobs that contribute to a dynamic U.S. economy. And when NASA's needs are met, the potential is enormous for this sector to expand into other activities with other customers, and become a job creating engine for decades to come. The Cape will figure prominently in this process.

esuckow: In addition to serving as the current NASA administrator, you also flew aboard the Shuttle as a pilot and commander. Do you have a favorite Shuttle memory? If so, what is it?

CharlieB: Interestingly, my favorite memory is not one involving flight. It is the life changing experience of spending two years training with and getting to know Sergei Krikalev and Vladimir Titov and their families as we prepared for STS-60, my final flight.

lmogford: What do you see as the biggest impact NASA Aeronautics research will have on the future of aviation?

CharlieB: While it is always difficult to predict the future, we are very hopeful that some of our plans with blended wing body aircraft currently being discussed with industry, academia and other federal agencies will one day revolutionize air travel for passenger, cargo and even military use.

CharlieB: Thanks to everyone for participating in the chat. I do want to extend my deepest appreciation to the Shuttle team for their hard work over the last 30 years. Go Atlantis!

Jason (Moderator): Thank you Administrator Bolden for the great answers to everyone's questions today. We appreciate your taking time out of your day to sit down with us. Our chat is over! Thanks to everyone for participating. A transcript will be available within the next few business days.