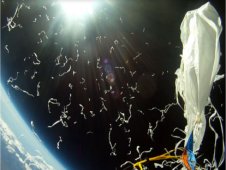 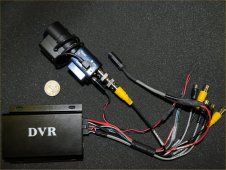 Prototype camera and DVR payload for a balloon-based meteor observation flight into the atmosphere. (NASA/MSFC/ Rhiannon Blaauw)
View large image Get the latest on the balloon cam and its data. The 2012 Lyrid meteor shower peaks on the night of April 21-22, with a new moon providing darker skies for meteor watching. In addition to live meteor camera views from the ground, astronomers at NASA's Marshall Space Flight Center in Huntsville, Ala. and Dr. Tony Phillips of Science@NASA are teaming up to seek a "new dimension" for Lyrid viewing.

Dr. Phillips and a dozen students from Union High School and Home Street Middle School in Bishop, Calif., will launch a video camera on a balloon above Earth’s surface on the night of the Lyrids peak -- hopefully to capture brilliant meteors burning up in the atmosphere from a vantage point well above the clouds. Bill Cooke and his meteor team at the Marshall Center will conduct a live Web chat during the Lyrids peak then cross-compare balloon images with simultaneous images from meteor cameras on the ground.

Because the rubber balloon is "off the shelf" and very light -- approximately 1.5 kg -- its payload must be less than a cubic foot in size and weigh less than 3 kg. For the Lyrid meteor shower, this payload will be a sensitive camera with a 40-degree field of view that will record about 2.5 hours of video footage to a solid state DVR, along with a GPS tracking system to permit tracking of the balloon during flight. At launch, the balloon is inflated with helium until it is about 6 feet in diameter; this size will increase as it gains altitude. Previous balloon flights have floated to recorded heights of almost 125,000 feet -- above the Earth's tropopause.

Once the balloon rises above the cloud-strewn tropopause, the attached camera should produce about an hour of crisp video footage with minimal shaking. It is hoped that the camera will detect faint meteors -- between second and third magnitude -- which is about five magnitudes fainter than the fireball cameras will detect on the ground. While not expected, the team hopes for the good luck to capture both a balloon-cam view and an meteor camera view of the same meteor, providing an unique perspective.

As with all good things, the balloon's journey over Earth must come to an end, usually after a 2.5 hour flight. As it rises ever higher, the helium-filled balloon will expand to about 40 feet in diameter, at which point the difference in pressure between the balloon's interior and the thin outside air exceeds the strength of rubber. The balloon pops, releasing a parachute that floats the camera payload gently back to Earth. Once retrieved, Dr. Phillips and his team will review the footage and then ship it to the Meteoroid Environment Office at the Marshall Center for analysis.

This approach to observation is a "proof of concept" balloon flight to detect meteors with a simple, inexpensive payload. The entire payload costs less than $1,000 including the balloon, camera, DVR, SD card and batteries. As the balloon pops and sends down its priceless payload, it's truly a case of getting plenty of "bang for the buck."