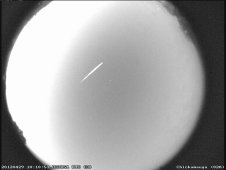 An Eta Aquarid meteor streaks over northern Georgia on April 29, 2012. (NASA/MSFC/B. Cooke)
View large image Editor's note: This event is now closed.
› Chat Transcript (PDF, 125 Kb)
Each spring as Earth passes through the debris trail from Halley's Comet (1P/Halley), the cosmic bits burn up in our atmosphere and result in the annual Eta Aquarid meteor shower. This year the peak will occur on the night of May 5 about 9 p.m. EDT with meteor rates of about 30-40 meteors per hour near peak. Eta rates will also be good on the evening of May 4. The Etas contain quite a few fireballs. Ideal viewing conditions are clear skies away from city lights, especially just before dawn.

Find an area well away from city or street lights. Lie flat on your back on a blanket, lawn chair or sleeping bag and look up, taking in as much of the sky as possible. After about 30 minutes in the dark, your eyes will adapt and you will begin to see meteors. Be patient -- the show will last until dawn, so you have plenty of time to catch a glimpse.