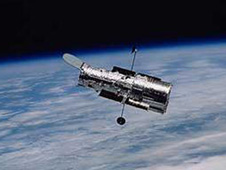 Backdropped by the horizon of the blue and white Earth and the blackness of space, the Hubble Space Telescope (HST) floats gracefully after the release from Columbia’s robot arm at the close of a successful servicing mission.
Image Credit: NASA On Thursday, May 31, at 3:00 p.m. EDT NASA will host an informal discussion for the general public with astronomers about new Hubble Space Telescope observations that allow them to predict with certainty the next major cosmic event to affect our entire galaxy, sun, and solar system.

It has been known for a long time that the Andromeda galaxy is approaching us. Because of uncertainties in Andromeda's motion, it has not been possible to determine whether the Milky Way will have a head-on collision or glancing blow with the neighboring galaxy billions of years in the future. Hubble's precise observations will settle this question.

The web chat panel members are: