This year's Leonids meteor shower peaks on Tuesday, Nov. 17. If forecasters are correct, the shower should produce a mild but pretty sprinkling of meteors over North America followed by a more intense outburst over Asia. The phase of the moon will be new -- setting the stage for what could be one of the best Leonid showers in years.

"We're predicting 20 to 30 meteors per hour over the Americas, and as many as 200 to 300 per hour over Asia," says Bill Cooke of the Meteoroid Environment Office at NASA's Marshall Space Flight Center. "Our forecast is in good accord with independent theoretical work by other astronomers."

Leonids are bits of debris from Comet Tempel-Tuttle. Every 33 years the comet visits the inner solar system and leaves a stream of dusty debris in its wake. Many of these streams have drifted across the November portion of Earth's orbit. Whenever our planet hits one, meteors appear to be flying out of the constellation Leo. 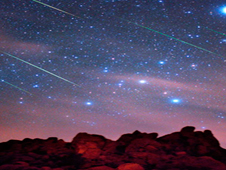 Leonids Meteor Shower as seen from Joshua Tree National Park in 2001. Image Credit: Wally Pacholka / AstroPics.com. "We can predict when Earth will cross a debris stream with pretty good accuracy," says Cooke. "The intensity of the display is less certain, though, because we don't know how much debris is in each stream." Caveat observer!

Bill Cooke was online on Monday, Nov. 16, 2009 at 4:00 p.m. EST and for over 90 minutes fielded numerous questions about this year's Leonids Meteor Shower. Many thanks to everyone who joined us for today's chat.