Thanks for all your votes. We’re honored to be one of the top five finalists.The winner for Tweet of the Year:
"This is history." - @BarackObama.

You can see the full list of winners at http://mashable.com/owa/pages/winners. 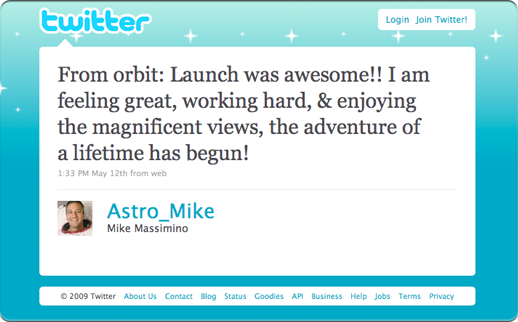 
Twitter is a social media tool that offers a new vehicle for NASA to interact with non-traditional audiences in a dynamic, viral conversation about space, the merits of exploring the unknown, and its relevance to every day life here on our home planet. Twitter allows citizens of this planet to converse with and learn from scientists, engineers, policy-makers, and space travelers.

Mike @Astro_Mike Massimino is NASA’s first astronaut to use Twitter before, during, and after a space shuttle mission.  STS-125, the final Hubble repair mission, captivated enthusiasts around the world. @Astro_Mike's tweets during the mission endeared him to the social media crowd.

Voting began November 18 and will extend through December 13, consisting of one vote per day per category. Winners will be announced Tuesday, December 15. You must have a social media account on Facebook or Twitter to participate. But if you do, show @Astro_Mike your appreciation for his willingness to share his experience in Zero-G with those of us left on Earth.

Related Article:
› Astro Mike rocketing to a Million on Twitter.