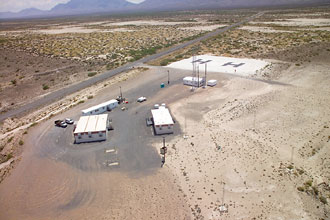 The White Sands Space Harbor (WSSH) Operations Control Center (WOCC) is located on the banks of the dry lakebed where the administrative functions and heavy equipment are managed. A new WOCC was installed in 1999, allowing the old building to be utilized for telecommunications and, if a landing of the shuttle were to occur, the center for White Sands Missile Range security. Located adjacent to the new WOCC is the medical facility. The area around the WOCC would be the site for additional office trailers and Air Force mobile shelters utilized during the shuttle turnaround operations. 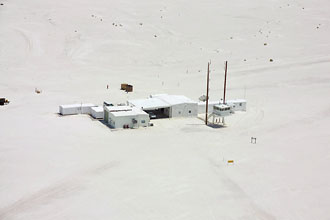 The Runway Control Center (RCC), also called the Harbor Utility Building (HUB), is located southeast from the intersection of the two long runways. 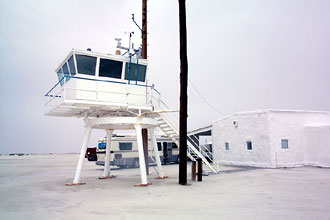 The control tower is manned during all STA and shuttle missions. Personnel necessary for maintaining the landing aids and fire crash and rescue are located at the RCC. Crash and rescue emergency personnel are provided from Holloman Air Force Base for STA and shuttle convoy support. Also located close to the RCC is a weather station monitored by the U.S. Army White Sands Missile Range.

The combination of water and gypsum forms a highly corrosive mixture, which requires corrosion-preventive measures, revised materials or construction techniques, and increased maintenance. Below-grade work is discouraged because the compacted gypsum is very hard, and disturbing it results in an unstable surface, which is very difficult to repack.

Structures at WSSH are steel-framed with sheet-metal exterior and portable buildings and trailers. All are foamed and painted to protect from the heat, infiltration of gypsum, and corrosion. There is no landscaping. The deservice facilities, which includes a tow-way, were moved from the center of the lakebed and placed on the southwest corner of the area. 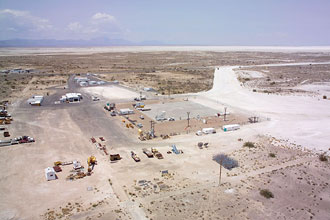 The facility consists of a concrete pad set so operations are out of the lakebed environment, which almost completely eliminates problems with blowing gypsum. The original crane has been removed and the plan is to use two, rented mobile cranes for mating operations in the event of a landing. Equipment used in the initial safeing of the shuttle is kept at the facility. Deservice area is located southwest of the airfield at the edge of the lakebed; the prevailing southwest winds help to minimize problems with gypsum.

During wet spells, run-off from the nearby mountains occasionally produces ponds and lakes, which may persist for several months. 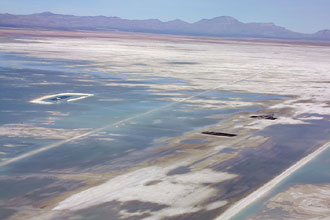 The airfield slopes toward the southwest and with the help of dikes and drainways, it is usable most of the time. The area between the airfield and the deservice pad is often flooded and water passes through a culvert under the tow-way.