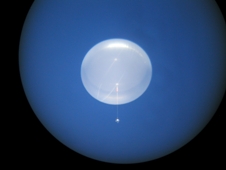 This seven-million-cubic-foot super-pressure balloon is the largest single-cell, super-pressure, fully-sealed balloon ever flown. When development ends, NASA will have a 22 million-cubic-foot balloon that can carry a one-ton instrument to an altitude of more than 110,000 feet, which is three to four times higher than passenger planes fly.

"This flight test is a very important step forward in building a new capability for scientific ballooning based on sound engineering and operational development," said W. Vernon Jones, senior scientist for suborbital research at NASA Headquarters in Washington. "The team has further work to do to enable the super pressure balloon to lift a one-ton instrument to a float altitude of 110,000 feet, but the team has demonstrated they are on the right path."

The test flight was launched Dec. 28, 2008, from McMurdo Station, which is the National Science Foundation's logistics hub in Antarctica. The balloon reached a float altitude of more than 111,000 feet and continues to maintain it in its 11th day of flight. The flight tested the durability and functionality of the scientific balloon's unique pumpkin-shaped design and novel material. The material is a special lightweight polyethylene film, about the thickness of ordinary plastic food wrap.

"Our balloon development team is very proud of the tremendous success of the test flight and is focused on continued development of this new capability to fly balloons for months at a time in support of scientific investigations," said David Pierce, chief of the Balloon Program Office at NASA's Wallops Flight Facility at Wallops Island, Va. "The test flight has demonstrated that 100 day flights of large, heavy payloads is a realistic goal."

In addition to the super pressure test flight, two additional long-duration balloons have been launched from McMurdo during the 2008-2009 campaign. The University of Hawaii Manoa's Antarctic Impulsive Transient Antenna launched Dec. 21, 2008, and is still aloft. Its radio telescope is searching for indirect evidence of extremely high-energy neutrino particles possibly coming from outside our Milky Way galaxy.

The super-pressure balloon was highlighted in the National Research Council's decadal survey "Astronomy and Astrophysics in the New Millennium," and will play an important role in providing inexpensive access to the near-space environment for science and technology.

The Wallops Flight Facility is a division of NASA's Goddard Space Flight Center in Greenbelt, Md. Wallops manages NASA's scientific balloon program for the Science Mission Directorate. Launch operations are conducted by the Columbia Scientific Balloon Facility of Palestine, Texas, which is managed for NASA by the Physical Science Laboratory of New Mexico State University in Las Cruces.