University Faculty and Students to "RockOn!" With NASA

WALLOPS ISLAND, Va. -- University faculty and students from across the country will RockOn! with NASA during a workshop June 22 - 27 at NASA's Wallops Flight Facility on Wallops Island in Virginia. 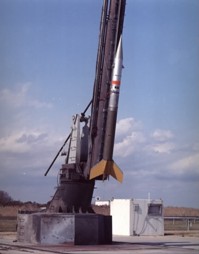 During RockOn!, they will learn the basics of building experiments for flight on suborbital rockets.

RockOn! teams will build the experiments from kits developed by students from the Colorado Space Grant Consortium and learn about the steps and procedures for creating payloads for flight. Each experiment package will include a Geiger counter and sensors for measuring temperature, acceleration and pressure. The experiments then will be integrated into payload cans for launch.

The week will culminate with the launching of the experiments early in the morning June 27 aboard a NASA Orion sounding rocket. The 20-foot tall, single-stage rocket is expected to fly to an altitude of 41 miles. After launch and payload recovery, participants will do preliminary data analysis and discuss their results.

Almost 60 people from universities in 22 states and Puerto Rico are participating in RockOn!. Eighty-percent of the participants are faculty members.

"This workshop will equip faculty with the skills and knowledge to start their own student-led sounding rocket payload programs at their university or college," said Chris Koehler, director of the Colorado Space Grant Consortium in Boulder. "This workshop adds a new level of hands-on programs for higher education students. It is expected that many of the participants will have students come to Wallops to fly their own sounding rocket payloads in the coming years."

NASA's Space Grant program sponsors university-based consortia that focus on developing our nation's future scientist and engineers, as well as improving science, engineering and technology education. Using the lessons learned through RockOn!, participants will work to make flight experiments a part of the educational process at their home institutions.

"The workshop builds on NASA's interest in reaching out to universities for engagement with sounding rocket payload research and educational experiences," said Mary Sandy, director of the Virginia Space Grant Consortium in Hampton, Va. "It taps into the National Space Grant College and Fellowship Program interest in having students and faculty participate in space experimentation and real space missions."

For more information on NASA education programs on the Internet, visit: http://www.nasa.gov/education