NASA and the National Oceanic Atmospheric Administration (NOAA) opened a new chapter in the world of hurricane observation by making the first unmanned flight into Hurricane Noel. An unmanned aerial system, or UAS, flew into the eye wall of the hurricane at altitudes as low as 300 feet. Using the small, remotely piloted aircraft, scientists were able to make detailed observations of areas of hurricanes that are too dangerous for manned aircraft closing an important gap in obtaining real-time near-surface meteorological and oceanographic data. 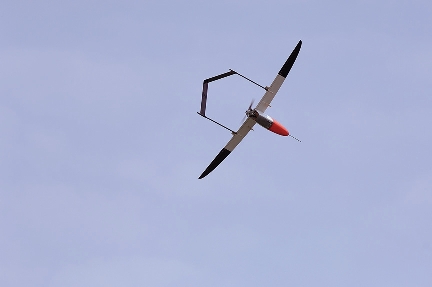 “NASA is pleased to partner with NOAA in achieving this long-time goal of boundary layer observations into an active hurricane.” said Randy Albertson, deputy manager of the Suborbital Science Program for the Science Mission Directorate at NASA Headquarters, Washington. “The Aerosonde Hurricane Boundary Layer Mission, combined with data from recent NASA and NOAA field missions using conventional aircraft and satellites, will provide a valuable new set of observations for air-sea interaction and tropical cyclone research.”

The UAS was launched from NASA’s Wallops Flight Facility at 2:08 p.m.(EST), on Friday, November 2. Detailed observations of the near-surface hurricane environment have been elusive because of the severe safety risks associated with low level manned flight missions. The unmanned aerial system flew in winds reaching 80 mph in the core of the storm for approximately 7.5 hours providing real-time detailed observations of the near surface, high wind environment to NOAA forecasters at the National Hurricane Center, Miami.

“This historic Aerosonde mission into Hurricane Noel is the first time we are able to successfully fly an unmanned aircraft into the inner core of a hurricane. Unmanned flights at very low altitude are important since they give us unique insights and continuous observations in a region of the storm where the ocean’s energy is directly transferred to the atmosphere just above,” said Joe Cione, a hurricane researcher at NOAA’s Atlantic Oceanographic and Meteorology Laboratory, Miami, and the lead scientist on this project.

The Aerosonde unmanned aerial system is owned and operated by AAI Corporation, Hunt Valley, Md. It operated within a 100 to 500 nautical mile radius from the departure point at the NASA Wallops Flight Facility into the region of Hurricane Noel where the atmosphere meets the sea. Coordination, command and control of the aircraft was done by AAI, based out of NASA Wallops.

The environment where the atmosphere meets the sea is critically important in hurricanes as it is where the ocean's warm water energy is directly transferred to the atmosphere just above it. The hurricane/ocean interface also is important because it is where the strongest winds in a hurricane are found. Observing and ultimately better understanding this region is crucial to improving forecasts of hurricane intensity and structure. Enhancing this predictive capability would not only save the U.S. economy billions of dollars, but more importantly, it could save many lives.

In September 2005, the 5-foot-long Aerosonde with a 10-foot wing span, was flown from NASA Wallops Flight Facility into Tropical Storm Ophelia on a 10-hour mission sending back data from readings that were taken and relayed every half-second as the storm moved off North Carolina's Outer Banks and past the Virginia coast.