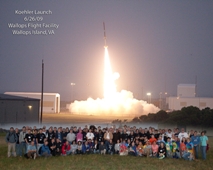 U.S. university faculty and students are invited to a weeklong workshop to learn how to build and launch a scientific experiment into space. NASA's Wallops Flight Facility in Virginia is hosting the RockOn! 2010 workshop June 19-24 in partnership with the Colorado and Virginia Space Grant Consortia. Registrations for the 2010 workshop are being accepted through March 22.

Each experiment will provide valuable scientific data, analyzed as part of the student led science and engineering research. The program engages faculty and students in science, technology, engineering and mathematics skills critical to NASA's future engineering, scientific, and technical missions.

Approximately 100 faculty and students participated each year in the 2008 and 2009 workshops. All experiments have been successful, completed on time, launched and recovered.

NASA initiated the National Space Grant College and Fellowship Program in 1989. The Space Grant national network includes more than 850 affiliates from universities, colleges, industry, museums, science centers, and state and local agencies. The goal is to support and enhance science and engineering education, and research and public outreach efforts for NASA's aeronautics and space projects. These affiliates belong to one of 52 consortia in all 50 states, the District of Columbia and the Commonwealth of Puerto Rico.

For more information about RockOn! and to register online, visit: http://spacegrant.colorado.edu/rockon

The Sounding Rockets Program Office at NASA's Wallops Flight Facility will be providing the rocket and launch operations during the workshop. For more information about NASA's sounding rocket program, visit: http://sites.wff.nasa.gov/code810