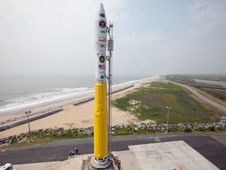 “We are very pleased to continue our support to the U.S. Air Force and the Operationally Responsive Space Office (ORS) with today’s successful launch,” said Bill Wrobel, director of NASA’s Wallops flight Facility. “This is the fourth Minotaur 1 launch from Wallops since December 2006 and we look forward to collaborating with the Air Force and ORS on future projects.”

“Today’s launch continues the Wallops legacy of providing efficient and cost effective support to our launch customers that include government and commercial organizations,” Wrobel said.

Further information on the mission is available on the Internet at:
http://www.nasa.gov/centers/wallops/missions/ORS.html

Information on future missions from Wallops is available on the Internet at:
http://www.nasa.gov/wallops

Launch information also is available on the Wallops launch status line at 757-824-2050.

The next mission scheduled from NASA’s Wallops Flight Facility is two series of two suborbital rockets. Both series include a Terrier-Improved Orion and a Black Brant V between 9:30 a.m. and 1:30 p.m. July 5 through 25. Wallops Release No. 11-18