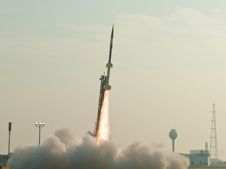 Information on future missions from Wallops is available on the Internet at:
http://www.nasa.gov/wallops

Launch information also is available on the Wallops launch status line at 757-824-2050.

The next launch currently scheduled from Wallops is a NASA Terrier-Improved Orion carrying educational experiments. The launch window is June 23 – 25 between 6 and 9 a.m. Wallops Release No. 11-12