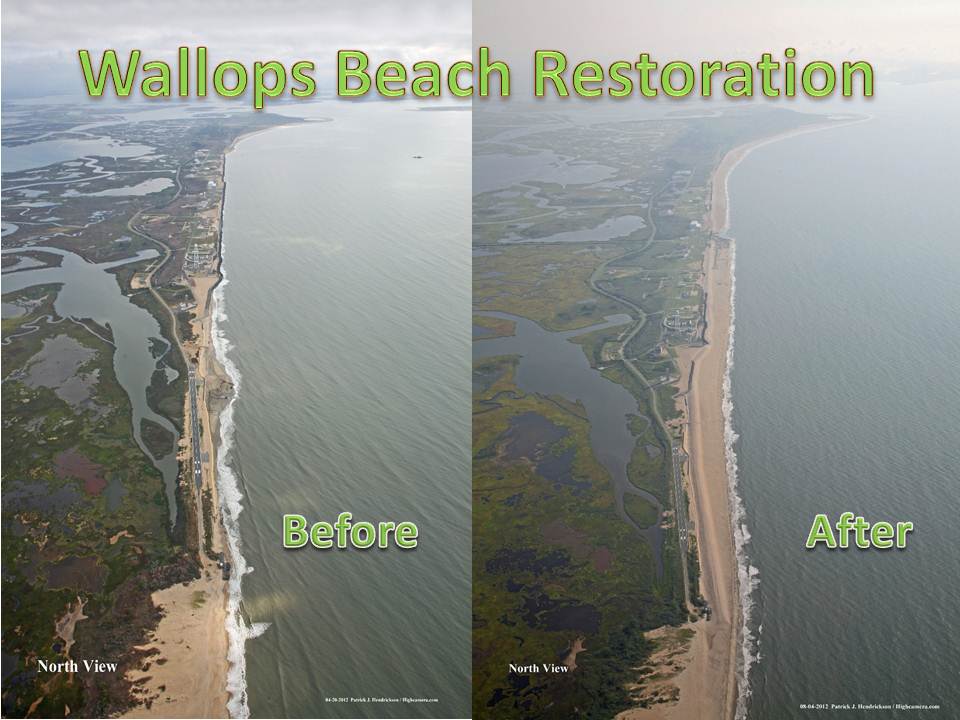 The beach is the centerpiece of the Wallops Island Storm Damage Reduction project, which wrapped up an important phase Aug. 10 with the final grains of some 3.2 million cubic yards of sand falling into place along the island’s coastline.

Built in partnership with the U.S. Army Corps of Engineers, the beach serves as a buffer between the ocean and Wallops’ critical launch assets. “The natural beach eroded away years earlier and in some places the existing sea wall was being undermined and near failure at several locations,” said Paul Bull, program manager for the beach replenishment project. “Multiple programs rely on our launch assets each year, not to mention upcoming commercial space station resupply missions, and this beach will help mitigate against natural threats.”

Engineers designed the sea wall and beach to withstand everything from estimated potential sea-level rise to the proverbial 100-year storm.

Three ships from Great Lakes Dredge and Dock—the Liberty Island, Dodge Island, and Padre Island—began work April 8, 2012, collecting sand from a shoal in the Atlantic some 12 miles (sailing distance) off the coast of Wallops and then connecting to a distribution buoy to build up the beach. The Liberty Island, the largest of the three ships, pumped 452 loads of sand, with the Dodge and the Padre pumping 369 and 344 loads respectively.

The first phase of the project involved extending the island seawall about 1,419 feet. Now, with the completion of the beach, workers are in the process of installing sand fencing to help protect the beach from erosion, and in the fall beach grass will be planted.

According to Bull, who has worked on the project since 2005, engineers will monitor beach erosion closely and beach renourishment is planned every 3 to 7 years, depending on the need.