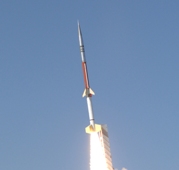 Not much bigger than a child’s toy block, two spacecraft designed and built by university students in Kentucky and California will fly in space for a short period this month to gather information that may be applied to future small Earth orbiting space vehicles.

The spacecraft flew on a NASA suborbital Terrier-Improved Malemute sounding rocket. The launch occured on March 27, 2010.

The two spacecraft, also known as cubesats, will be ejected during the suborbital flight at approximately 77 miles altitude, 72 seconds into the flight. NASA is flying the cubesats as secondary experiments on the flight which has a main purpose of testing the Improved Malemute rocket motor.

James Lumpp, Director of Space Systems Laboratory at the University of Kentucky and faculty advisor for the project, said, “This is the first time cubesats will be ejected in space on a suborbital trajectory. This capability of leveraging the cubesat satellite standard on a NASA sounding rocket could open a whole new chapter in fast, inexpensive access to space for small payloads.”

Students from Kentucky Space (a consortium of Kentucky universities) and California Polytechnic University, San Luis Obispo, built the cubesats using primarily off-the-shelf components. The standard cubesat, a miniaturized satellite for space research, weighed around 2 pounds and is a 4-inch cube. Students from Cal Poly developed the cubesat ejection system used for the flight and students at the University of Kentucky adapted it to work in the sounding rocket.

The Kentucky cubesat, called ADAMASat, was developed by students to allow experimentation with hardware and software subsystems they intend to fly in an orbital cubesat called KySat-1 that will be launched with the NASA Glory mission no earlier than November 2010. The subsystems include an antenna deployment system and power conditioning circuitry.

Students staffed several ground stations at Wallops, as well as stations at the University of Kentucky in Lexington, Morehead State University and at the U.S. Naval Academy in Annapolis, Md., to capture the telemetry during the flight. In addition, students distributed software packages for amateur radio enthusiasts to participate in the project.