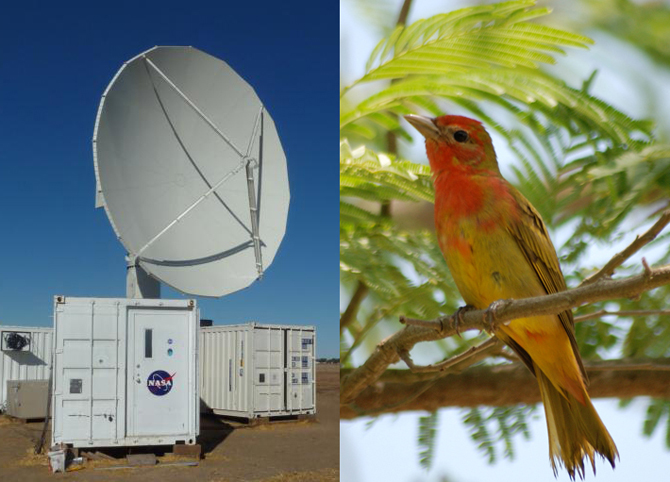 › View larger
Left: The NASA NPOL radar is a research grade S-band, scanning dual-polarimetric radar. It underwent a complete antenna system upgrade in 2010 and is one of two fully transportable research-grade S-band systems in the world. It is used to make accurate volumetric measurements of precipitation including rainfall rate, particle size distributions, water contents and precipitation type. Credit: NASA
Right: The Summer Tanager winters in Central and South America. Males are entirely red and females (shown here) are primarily a dull yellow. They eat bees and wasps. Credit: Kyle Horton

NASA and The Nature Conservancy have joined forces to support the ability to measure precipitation on a global scale while also understanding migratory bird habitats on the Eastern Shore of Virginia.

The organizations have signed a Space Act Agreement that will provide a location to support NASA’s Precipitation Science programs, in particular the NASA-JAXA Global Precipitation Measurement mission. As a byproduct of this research, data also will be collected that can be used by Nature Conservancy-affiliated researchers to study migratory birds on Virginia’s Eastern Shore.

Through the agreement, The Conservancy is providing access to NASA at the Virginia Coast Reserve near Oyster, Va., to place the NASA Polarimetric (NPOL) weather radar, rain gauges and other instruments that will support ground validation of the Global Precipitation Measurement (GPM) mission. In return, NASA will, on request and a non-interference basis, support migratory bird studies by The Nature Conservancy using the NPOL radar.

The GPM mission is an international network of satellites that will provide the next generation of global space-based observations of rain and snow. The GPM Core Observatory is scheduled for launch in 2014. These GPM measurements of precipitation will advance our understanding of the global water cycle, ability to predict flooding and improve forecasting of weather.

“The NPOL radar and NASA rain gauge facilities being deployed in and around Oyster and the Delmarva Peninsula will support the GPM mission by providing accurate, high resolution measurements of rainfall- a process referred to as “ground validation”’ said Walt Petersen, GPM ground validation scientist at the Wallops Flight Facility in Virginia.

He said, “At the Nature Conservancy site, ground validation is used to assess measurement accuracy of the GPM satellite instruments through a more complete understanding of rainfall characteristics and the physical processes associated with rainfall production.”

Barry Truitt, a scientist with The Nature Conservancy, said “This five-year collaborative project with NASA will help The Conservancy and our partners further identify what habitats migratory birds are utilizing for fall stopovers along the lower Delmarva Peninsula and the conservation status of these lands. This agreement builds on the Conservancy’s forty plus years of research, restoration, and protection on the Eastern Shore of Virginia.”

To provide the necessary rainfall measurements for GPM ground validation a combination of radar and rain gauge measurements is needed. NASA is stationing approximately 50 rain gauges in an area of approximately 10 square miles near Oyster. This very concentrated network of gauges will serve as a reference for validating rain estimates made using the advanced capabilities of the NPOL radar.

The Conservancy is collaborating with professors Jeff Buler of the University of Delaware and Eric Walters of Old Dominion University on using the NPOL radar and its data stream for migratory bird studies on the southern end of the Delmarva Peninsula.

Buler is a radar ecologist who has mapped the distributions of birds during migratory stopover by observing their locations when they take flight in the evenings using the national network of NEXRAD weather surveillance radars. NPOL is a unique surveillance radar that will collect datasets offering improved bird identification and observation capabilities. The NPOL will be located in a region where NEXRAD radars do not already observe migrating birds.

Walters is an avian conservation biologist who will be ground-truthing the identity and abundance of both birds and habitat components within high-use stopover habitats and areas identified by Buler and his research team.

Future research plans for the team include validating NEXRAD-based bird stopover models, observations of shorebird and waterfowl activity in the coastal bays, discerning bird from insect flight activity, and observations of the flight behavior of migrating birds in relation to weather.

More information on the Global Precipitation Measurement mission is available at:
http://www.nasa.gov/mission_pages/GPM/main/index.html