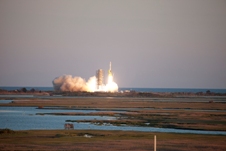 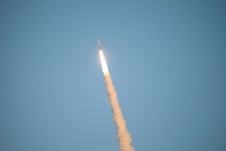 Media:
Media wishing to cover the mission must register with Rebecca Powell at rebecca.h.powell@nasa.gov by 8 a.m., Friday, May 15.
Those members of the media that have previously attended the past attempts or previously registered need to re-register.
Freelancers also need to submit a letter from the media organization that they are representing.

Mission Information
The Air Force Research Laboratory’s TacSat-3 satellite will launch May 5 on an Air Force Minotaur I rocket from NASA's Wallops Flight Facility and the Mid-Atlantic Regional Spaceport. The launch window on May 5 will run from 8 p.m. to 11 p.m.

The PharmaSat experiment, developed by NASA’s Ames Research Center and will measure the influence of microgravity upon yeast resistance to an antifungal agent. PharmaSat focuses on questions key to countermeasure development for long-term space travel and habitation.

Three cubesats will be launched as secondary payloads on the TacSat-3 mission. The satellites, which contain their own power and data systems, are four-inch cubes that weigh 2.2 pounds each. The cubesats are being provided by California Polytechnic State University, San Luis Obispo; The Aerospace Corporation, El Segundo, Calif. and the Hawk Institute for Space Sciences, Pocomoke City, Md. The three satellites are placed in a Poly Picosatellite Orbital Deployer (P-POD), the standard deployment system for cubesats. The P-POD was developed by the Aerospace Engineering Department at Cal Poly. During the rocket’s ascent, each cubesat will be deployed separately from the P-POD into space.

Launch Information
The TacSat-3 mission is scheduled for launch on the evening of May 5, 2009. The window runs through May 9. The launch window on May 5 is from 8 p.m. to 11 p.m.

Viewing the Launch
The launch will be visible in the mid-Atlantic region. Locally, the NASA Visitor Center on Va. Route 175 and the beach at the Chincoteague National Wildlife Refuge/Assateague National Seashore will be open to view the launch.

Launch Status
Prior to the start of the countdown on launch day, updates on the status of the launch will be provided on this web page and on the Wallops launch status line at 757-824-2050.

On the day of the launch updates will be provided on the status line and radio station 760 AM, which has a range of about 5 miles from the NASA Visitor Center. In addition, the launch will be web cast at http://sites.wff.nasa.gov/webcast/.

Countdown status also will be available during the countdown on Twitter at http://twitter.com/NASA_Wallops