The NASA Wallops Flight Facility demonstrated its quick response capabilities with the successful launch this morning of an U.S. Air Force Minotaur 1 rocket from the east coast of Virginia.

“Since being selected by the Space and Missile Systems Center Space Development and Test Wing as the launch site a mere 7 months ago, Wallops personnel met all launch goals. Wallops personnel definitely have a ‘can do’ attitude and they did whatever was necessary to get the job done,” said John Campbell, director of the Wallops Flight Facility.

“As we have been doing throughout our 61-year history, the Wallops staff responded quickly and efficiently to the country’s launch needs,” Campbell said. “It was truly a team effort and an honor for the Facility to work with all the participants to support this successful launch,” he added.

The satellites were launched on the four-stage Minotaur I launch vehicle contracted by the Space and Missile Systems Center through Orbital Sciences Corporation’s Launch Systems Group. The mission was conducted from the Mid-Atlantic Regional Spaceport’s launch pad on the south end of Wallops Island.

Two Minotaur 1 rockets are scheduled for launch in 2007 from Wallops carrying the Near-Field Infrared Experiment (NFIRE) satellite in April and the TacSat-3 satellite in October. Both missions will use the Spaceport’s launch pad. 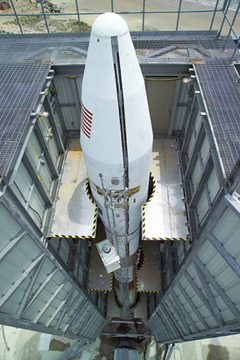 The main payload was the TacSat-2 satellite which exhibited tenets of responsive space concepts.

The secondary payload was the GeneSat-1, which was developed by the NASA Ames Research Center. GeneSat-1 is a fully automated, miniature spaceflight system that provides life support for small living things. The mission looked for genetic changes in bacteria (E.Coli) during spaceflight. The E.Coli on board is E.Coli K-12, which cannot live within humans. The knowledge obtained from the GeneSat-1 experiment may contribute to safe, long-duration space missions by humans.

The TacSat-2 satellite carries on board a new technology instrument sponsored by the NASA New Millennium Program which develops and validates in space advanced technologies. The instrument, called the Inertial Stellar Compass (ISC), is part of the Space Technology 6 project. The ISC was developed by Draper Laboratory in Cambridge, Massachusetts. The ISC is a miniature star camera and MEMS gyro suite which will allow future small spacecraft autonomously find its orientation in space.