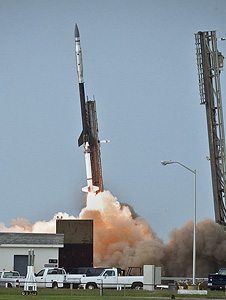 WALLOPS ISLAND, Va. -- A successful NASA flight test has shown that a spacecraft returning to Earth can use an inflatable heat shield to slow and protect itself as it enters the atmosphere at hypersonic speeds. This was the first time anyone has successfully flown an inflatable reentry capsule, according to engineers at NASA's Langley Research Center.

The Inflatable Re-entry Vehicle Experiment, or IRVE, was vacuum-packed into a 15-inch diameter payload "shroud" and launched on a small sounding rocket from NASA's Wallops Flight Facility on Wallops Island, Va. Nitrogen inflated the 10-foot (3 m) diameter heat shield, made of several layers of silicone-coated industrial fabric, to a mushroom shape in space several minutes after liftoff.

"This was a huge success," said Mary Beth Wusk, IRVE project manager, based at Langley. "IRVE was a small-scale demonstrator. Now that we've proven the concept, we'd like to build more advanced aeroshells capable of handling higher heat rates."

The Black Brant 9 rocket took about four minutes to lift the experiment to an altitude of 131 miles. Less than a minute later it was released from its cover and started inflating on schedule at 124 miles up. The inflation of the shield took less than 90 seconds.

"Everything performed well even into the subsonic range where we weren't sure what to expect," said Neil Cheatwood, IRVE principal investigator and chief scientist for the Hypersonics Project of NASA's Aeronautics Research Mission Directorate's Fundamental Aeronautics Program. "The telemetry looks good. The inflatable bladder held up well." 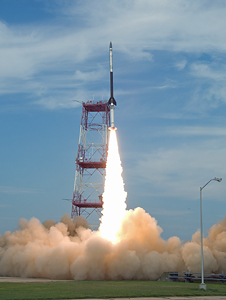 Inflatable heat shields hold promise for future planetary missions, according to researchers. To land more mass on Mars at higher surface elevations, for instance, mission planners need to maximize the drag area of the entry system. The larger the diameter of the aeroshell, the bigger the payload can be.

Inflatable aircraft are not a new idea. Hot air balloons have been around for more than two centuries and blimps are a common sight over many sports stadiums. But it's hard to imagine an inflatable spacecraft.

Researchers from NASA's Langley Research Center in Hampton, Va., are working to develop a new kind of lightweight inflatable spacecraft outer shell to slow and protect reentry vehicles as they blaze through the atmosphere at hypersonic speeds.

They will test a technology demonstrator from a small sounding rocket to be launched at NASA's Wallops Flight Facility at Wallops Island, Va. The launch is scheduled for Aug. 17.

The Inflatable Re-entry Vehicle Experiment, or IRVE, looks like a giant mushroom when it's inflated. For the test, the silicon-coated Kevlar aeroshell is vacuum-packed inside a 16-inch (40.6 cm) diameter cylinder, but once it unfurls and is pumped full of nitrogen it is almost 10 feet (3 m) wide.

Engineers say the concept could help land bigger objects on Mars. "We'd like to be able to land more mass on Mars," said Neil Cheatwood, IRVE's principal investigator and chief scientist of the Hypersonics Project within NASA's Fundamental Aeronautics Program. "To land more mass you have to have more drag. We need to maximize the drag area of the entry system. We want to make it as big as we can, but the limitation has been the launch vehicle diameter." 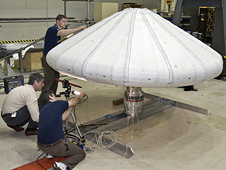 According to Cheatwood, the idea of inflatable decelerators has been around for 40 years, but there were technical issues, including concerns about whether materials could withstand the heat of re-entry. Since then materials have advanced and because of numerous Mars missions, including rovers, landers and orbiters, there's more understanding of the Martian atmosphere.

That means researchers can now test a subscale model of a compact inflatable heat shield with the help of a small two-stage rocket. The vehicle is a 50-foot Black Brant 9 that will lift IRVE outside the atmosphere to an altitude of about 130 miles (209 km). Engineers want to find out what the re-entry vehicle will do on the way down.

"The whole flight will be over in less than 20 minutes," said Mary Beth Wusk, IRVE project manager. "We separate from the rocket 90 seconds after launch and we begin inflation about three-and-a-half-minutes after that. Our critical data period after it inflates and re-enters through the atmosphere is only about 30 seconds long."

Cameras and sensors on board will document the inflation and high-speed free fall and send information to researchers on the ground.

After its brief flight IRVE will fall into the Atlantic Ocean about 90 miles down range from Wallops. No efforts will be made to retrieve the experiment or the sounding rocket.

The Inflatable Re-entry Vehicle Experiment is an example of how NASA is using its aeronautics expertise to support the development of future spacecraft. NASA's Aeronautics Research Mission Directorate in Washington funded the flight experiment as part of its hypersonics research effort.

On the day of the launch the Wallops Flight facility plans to use the Internet to update the countdown status at:

A webcast the event will be featured at: