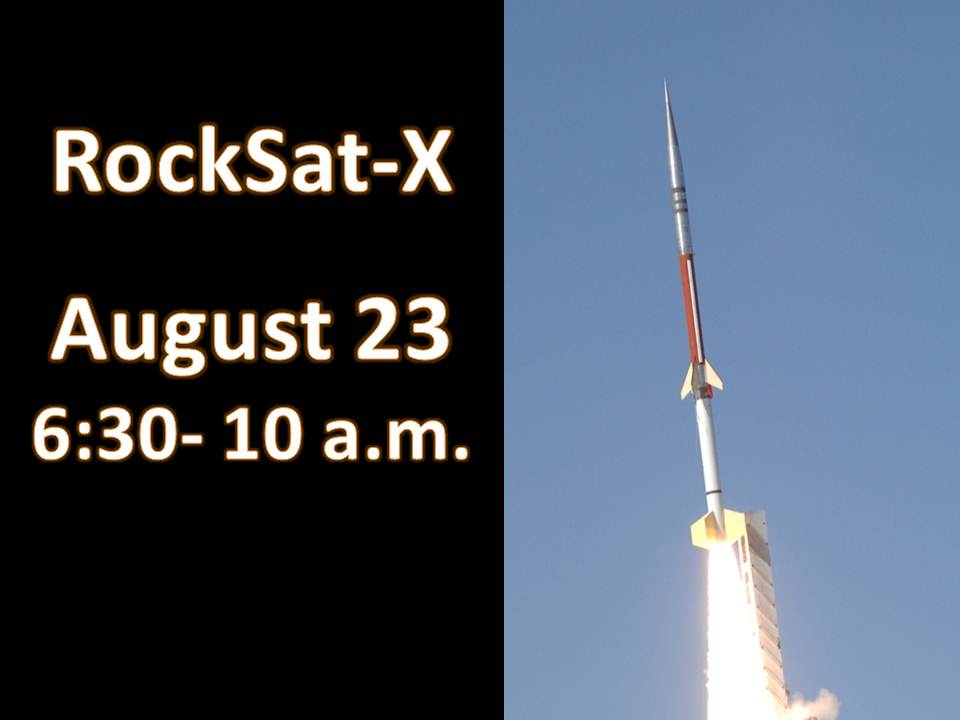 WALLOPS ISLAND, Va. -- University students will put their academic skills to the test when atmospheric and technology experiments they developed fly on a NASA suborbital sounding rocket. The launch will take place between 6:30 and 10 a.m., Thursday, Aug. 23, from the agency's Wallops Flight Facility at Wallops Island, Va.

Four university experiments will be flown as part of an educational project called RockSat-X, which is designed to provide students hands-on experience in designing, fabricating, testing and conducting experiments for space flight. The project is a joint effort between NASA and the Colorado Space Grant Consortium at the University of Colorado at Boulder.

The selected experiments for this year's RockSat launch are from Baylor University in Waco, Texas; University of Colorado at Boulder; the University of Puerto Rico; and Virginia Polytechnic Institute and State University (Virginia Tech) in Blacksburg, Va.

"RockSat-X is part of a series of student flight programs designed to enhance students' skills and prepare them for careers at NASA and in the aerospace industry," said Chris Koehler, director of the Colorado Space Grant Consortium.

The program begins with a hands-on workshop called RockOn and then proceeds to the RockSat-C and RockSat-X programs. At each level, the experiments become more complex, which provides students an opportunity to gain a greater understanding of the requirements for developing space-based experiments.

The experiments will fly on a two-stage Terrier-Improved Malemute rocket to a projected altitude of 98 miles. After the 15-minute flight, the payload carrying the experiments will splash down via parachute in the Atlantic Ocean approximately 66 miles off the coast of Virginia. The 875-pound payload will be recovered for re-use and experiment analysis.

The University of Puerto Rico will use a mass spectrometer to conduct an analysis of atmospheric particles and pressure. Virginia Tech and Baylor universities have teamed up to measure nitric oxide and atmospheric dust. The University of Colorado will be testing a device to assist in de-orbiting small spacecraft and the Colorado Space Grant Consortium will fly seven cameras to capture all the action in high-definition, which will be made available to the public shortly after recovery.

The RockSat-X concept provides students with a payload structure with pre-defined mechanical, power and data interfaces and volume and mass limits. This is the second RockSat-X mission, with the first having been flown July 11, 2011.

The project will be the ninth suborbital rocket mission this year from NASA's launch facility on Wallops Island and the first of four launches scheduled through mid-September.

RockSat-X program information is available at:


The launch will be available live on Ustream at: